Stone Fruit Special: Apricots and Pluots with a Cherry on Top!

Today is my first day being ABD, an acronym used by academics (and no one else) to mean “All But Dissertation.” It means that yesterday, I passed the oral portion of my qualifying exams and I’ve finally advanced to candidacy. This milestone makes me happy for two important reasons: first, it means I haven’t entirely wasted the past three years of my life. So that’s always good news.

My return to carefree farmers market shopping perfectly coincides with the return of certain farm stands that specialize in stone fruit. “Stone fruit,” of course, refers to fruit that is made of stone (!). My favorite fruits to make a return in the last week or so: apricots, pluots, and cherries. I bought as many as I could afford and then, obviously, I built them into a pyramid: 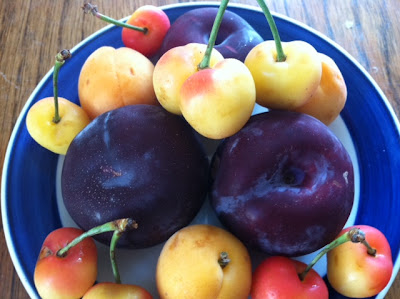 Apricots
I have to admit: until about a year ago, the only kind of apricot I had eaten was the dehydrated kind that comes in the snack boxes you order on airplanes. But recently, I tried a sample at the farmers market and was struck by how perfect apricots are. They take like, three bites to eat, so you don’t have to commit to them in the same way you have to commit to eating, say, an apple. (Note to my boyfriend: Don’t worry! I am only terrified of commitment when it comes to snacking on fruit.)

Anyway, I spent one dollar on a half-pound of apricots from Regier Family Farm in Dinuba, CA (distance from me: 239 miles). Regier Family Farm was founded in 1974 by Jim and Norma Regier and has since expanded to include a branch run by their daugher and son-in-law, Lisa and Anthony Galpin. The apricots are just ripening now, and the couple that I’ve eaten so far have been incredibly juicy and sweet.

Pluots
Unlike apricots, which I always knew existed, but of which I was afraid because of unfortunate airplane-food experiences, I didn’t know about pluots at all until about a year ago. Pluots are, of course, what happens when an apricot and a plum have a baby and name it something silly just to be jerks. Other apricot-plum hybrid types include “apriums” and “plumcots” – so yeah, there’s a whole brood of weirdly named kids running around.

But pluots are not genetically engineered fruits; rather, they were invented in 1989 after much cross-breeding experimentation by mad scientist Californian fruit breeder Floyd Zaiger.

I bought four dappled pluots from the Burkdoll Farm stand. Burkdoll Farm was established in 1858 in Visalia, CA (distance from me: 225 miles), and has been family-owned ever since. Pluots are a bit more of a commitment to eat than apricots, since they are squishy and juicy (and bigger, obviously). I usually slice them up and eat them with my hands rather than biting into them whole, in an attempt to avoid a condition I like to call Sticky Face.

Rainier Cherries
I’ve always loved cherries, but until recently, I’d only ever tried the dark red kind. But this week, I noticed baskets of cream-colored cherries being sold alongside the red ones of Clip Art fame. I discovered after (very) minimal research that they were called Rainier cherries and that they were expensive. They tasted a lot like regular cherries, but I wanted to buy them because they looked funny.

Like pluots, Rainier cherries were created by a fruit breeder. Harold Fogle invented them in 1952 by combining Bing cherries (the common red kind, high in antioxidants) and Van cherries (which resemble the Bing cultivar but are a bit smaller).

By the time I encountered these Rainier cherries, I had decided that if it was the creation of a mad scientist parading as a fruit breeder, I was going to buy it and eat it. Unless it was a monkey with four butts or something.

So I dropped $5 on a basket of Rainier cherries from Erickson Farms in Fresno, CA (distance from me: 231 miles). Established in 1988, Erickson Farms is a family operation comprising 160 acres and specializing only in cherries.

I’m so excited to discover all the stone fruits the farmers market has to offer in the summer. And because I am an eco-friendly girl, I plan to reuse the stone-like pits in creative ways, like making jewelry or setting elaborate booby traps.
Posted by Unknown at 4:35 PM 1 comment:

Like the protagonists in many romantic comedy films (or “romcoms,” as I like to call them), Kale and I first bumped into each other at a farmers market. At first I was skeptical of Kale – it’s not like people don’t eat it at all back east, but they certainly don’t subsist on it like they do here in southern California.

It’s easy to see why everyone out here loves it, though: not only is it an incredibly attractive type of cabbage, it’s high in vitamins K and C, calcium, and contains cancer-fighting sulforaphane. Even so, enjoying kale felt a bit like abandoning my roots.

But I couldn’t help it. Kale just tasted so good on everything, and I had to admit that I got a little kick out of embracing Kale; it made me feel sinfully earthy-crunchy (although I never went so far as to sprinkle bits of Kale on my granola – but there’s an idea for a rainy day!). It even smelled good the few times I accidentally burned it to the bottom of the wok in which I had been stir-frying it.

After a while, I tried to find interesting ways to spice up my relationship with Kale (without actually making it spicy). I tried eating it raw, but Kale was not into that type of thing. I realized that if I wanted to eat Kale raw, I’d have to massage it with oils first (oils of the olive variety, not the sensual massage kind). Otherwise, Kale gets revenge on my digestive system. Kale is kind of a spoiled b*tch.

At The Garden Of… farm stand, I learned something new: there are many different kinds of Kale. You might say Kale has multiple personalities. Or you might not say that, it’s up to you. 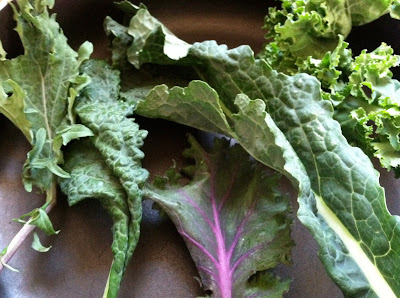 The Garden Of… (which has a delightfully mysterious name; garden of what?!) was selling bags that included a mixture of five different varieties. Here are a few of the most important kinds:

Curly Kale
This is the frilly, fun-looking kind most people are familiar with. It’s also called Scots Kale (but it doesn’t play the bagpipes, or this relationship would have ended long ago).

Chidori Kale
This kale is reddish-pink and tastes sweeter than other kinds.

Redbor Kale
This kale turns magenta (so... kind of the same color as Chidori Kale...) in cool climates and has a crisp texture.

Rape Kale
Don’t accept drinks from this kind of kale.

Dinosaur Kale
This flat, wide kale is prehistoric, planted by God to trick us into believing in evolution.

Red Russian Kale
This kale is grey and spindly, not to be confused with White Russian Kale. Incidentally, if Rape Kale hands you a White Russian, don’t drink it.
Posted by Unknown at 6:55 PM 2 comments:

I'm Going on a Picnic... and I'm Bringing Local Food and Wine!

If you know anything about me, you know I love wine. Whether it’s a rosé on the porch in the afternoon, a fruity white while preparing dinner, or a full red for breakfast for dessert, wine makes everything just a little more pleasant.

Of course, I’m no wine snob; I don’t have the time, money, or motivation to become one. But make no mistake: I jump at the chance to pretend to be a wine snob whenever the opportunity presents itself. Pretending to be a fancy person is kind of my M.O. and wine snobbery is particularly fun to feign. It involves a lot of mouth-swishing, slurping noises, and – my favorite – haughty facial expressions involving pursed lips and raised eyebrows.

Lucky for me, I live in one of the most important wine-producing areas of the country. Just north of Santa Barbara, the Santa Ynez Valley is home to dozens of beautiful vineyards, most of which have at least one tasting room. So for my twenty-sixth birthday (which was last week, in case you missed it), I decided to have a picnic at one of the most lovely local vineyards of all, Buttonwood Farm. Buttonwood produces not only wine, but herbs, flowers, and peaches in the summer months. They’re known for the sustainable practices of vineyard manager Armando Zepeda.

My friend Sasha’s birthday was the week before mine and we pretty much share all the same friends, so we threw a joint birthday party:
The morning of my birthday, I went to the Santa Barbara Farmers Market to buy some fruit for the picnic. I got two big baskets of strawberries from Jimenez Family Farm in Santa Ynez, California (distance from me: 30 miles) for just $7. Marcie Jimenez, whose delicious pies are also sold at the farmers market, has been running the farm since 2001 with her husband, Gustavo, and their two children, George and Christie.

I also bought some Gala apples from Fair Hills Apple Farm in Paso Robles, California (distance from me: 123 miles). David and Nancy have been growing all kinds of apples at Fair Hills, from Granny Smith to Fuji, since 1992. The Gala apples I bought tasted perfect sliced and served on a cracker with white cheddar cheese.

Our picnic also included finger sandwiches (made with local cucumbers and watercress), organic meats purchased at Whole Foods, local California cheeses, and a baguette from Our Daily Bread in downtown Santa Barbara: 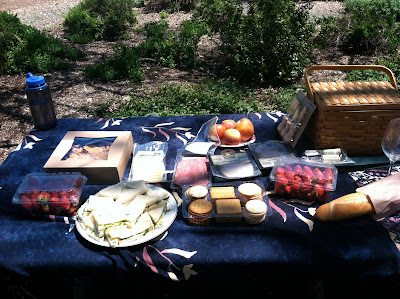 Aside from the delicious food and good friends, the best part about having a picnic at Buttonwood was the wine. We started off with a wine tasting (for $10 each, including the glass), then purchased a couple of bottles to enjoy with our food. It was such a wonderful afternoon that I almost forgot to be depressed about turning twenty-six. 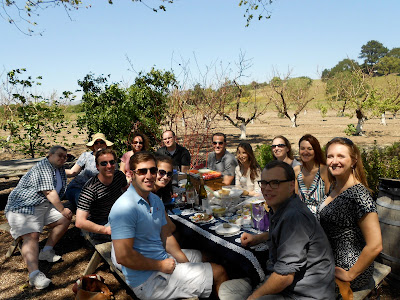