Food for Sex: A Lesson for Next Valentine's Day

If you're a romantically attached vegan, chances are that last week you had a delicious Valentine's dinner with your significant other, followed by some satisfying Valentine's sex (perhaps courtesy of Vegan Erotica, if you're into that type of thing).

But if you indulged in some of the most popular animal-based Valentine's meals and desserts, you might have run into some speed bumps (not the good kind) once you made it to the bedroom. In a report released last week, the Physicians Committee for Responsible Medicine investigated foods that can "break a loved one's heart" on Valentine's Day.

In particular, the PCRM looked into the Blue Ribbon Brownie at Applebee's, the Smoked Mozzarella Fondue at Olive Garden, the Maine Lobster with Stuffing at Red Lobster, the Porterhouse Steak at Outback Steakhouse, and the Fresh Strawberry Original Cheesecake at Cheesecake Factory.

First of all, I'll just state the obvious: if any of the above restaurants is your Valentine's dinner destination (ahem), chances are you're not getting lucky afterward anyway.

But let's assume your girlfriend has a thing for the Olive Garden. If you order the Smoked Mozzarella Fondue as an appetizer, you're consuming 940 calories and a whopping 1,940 milligrams of sodium; that's almost as much sodium as you should consume all day.

The Olive Garden, Applebee's, and Cheesecake Factory don't disclose how much cholesterol is in their food probably because, quite literally, it will kill you.

What does a meal like this mean for your sex life? In men, diets high in fat and cholesterol can lead to artery blockages that cause sexual dysfunction. In fact, men with ED have a 45 percent higher risk of suffering from a cardiovascular event. But women aren't safe, either: heart disease is the number one cause of death for women in the United States. And you can't really enjoy sex if you're dead.

So next Valentine's Day, steer clear of foods high in fat and cholesterol. They'll break your heart literally and figuratively.
Posted by Unknown at 11:17 AM No comments:

This is one of my go-to meals because it's pretty easy but delicious. My sister invented the sauce last summer and I've been making it ever since! Note: Step 4 (start drinking a glass of wine while you cook) is totally optional.

The Battle of the Bulgur

A few weeks ago, I received a chain email. Now, there are only two types of chain email that even make it past my spam filter these days: “inspiring” poetry and/or quotations about being a strong woman, living each day like it’s my last, etc. that my mom sends me; and recipe exchanges. This chain email was the latter.

It stressed me out for a couple of reasons. First of all, it instructed me to come up with a recipe, send it to a person I didn’t know, and then forward the original email to my twenty closest friends. Twenty closest friends? If I had twenty close friends, I thought to myself, I wouldn’t drive them away by forwarding them chain email.

But I did just that. I forwarded the chain email to my seventeen closest friends (and three people whom I consider to be just so-so friends), and I sent a pretty tasty quinoa recipe to the random girl whose contact information was at the bottom of the chain email.

The second reason this recipe exchange stressed me out was that I had to indicate that I wanted only vegan recipes, of course. I put “vegan” in parentheses after my name and contact info, knowing that it would likely limit the amount of recipes I received in return.

And I was right. I received only three emails, one of which was an apology for not participating. (Um, I forgive you.) Fortunately, one of the emails was from my friend Kinley, and it contained a recipe for Bulgur with Spinach and Basil.

I didn’t know what bulgur was, so I went to my local hippie grocery store, Lazy Acres. Amazingly, nobody at Lazy Acres knew was bulgur was, either. But after spending about ten minutes hunting around the bulk section with the help of a dedicated sales associate, I found it.

Bulgur with Spinach and Basil 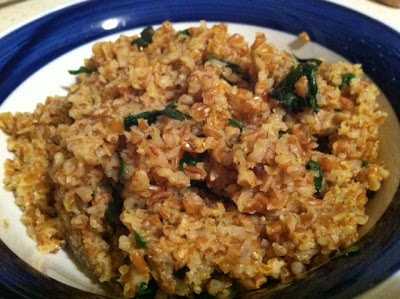 First, I combined the vegetable broth, bulgur, garlic, salt, pepper, and olive oil in a skillet and brought it to a boil. Then I reduced the heat and let it simmer for about fifteen minutes, until the bulgur had absorbed all the broth. Meanwhile, I chopped up the spinach and basil. When the bulgur was ready, I just stirred in the greens until they were all wilted.

It tasted great; I always like the combination of spinach, basil, and garlic, and the bulgur was a nice change from boring old rice. I ate it as a main course and it was quite filling, but it would also work as a side dish.

As I nommed on my bulgur, I decided to send Kinley a text message to say thank you for the recipe. Unfortunately, Kinley had changed her number recently without telling me (and I am only a little suspicious that it’s because I send her annoying text messages). So I had the following text message conversation with someone who is now thoroughly confused:

So, on the off chance that Not Kinley reads my blog: I hope this clears it up for you.
Posted by Unknown at 1:54 PM 3 comments:

Is It Child Abuse to Raise Your Kid Vegan? "What Would You Do?" on ABC Asks

The ABC series What Would You Do? uses hidden cameras to capture bystanders’ reactions to staged awkward, sometimes illegal, and always controversial situations, usually involving social prejudices. Psychologists and other experts weigh in, discussing the results with host John Quiñones.

In an upcoming What Would You Do? episode, which takes place at the Mason Jar Grill in New Jersey, a couple pressures the young daughter of a vegan mother to eat meat (they are all actors, including the waitress). After overhearing the girl’s mother explain to the waitress that she and her daughter are vegan, the intervening couple scolds the mother, saying, “She gets no protein,” and “It’s really a form of child abuse.”

Non-actor diners at nearby tables whisper among each other and stare as the couple goes so far as to order a hotdog for the little girl while her mother is in the bathroom. When the show airs, viewers will see whether the bystanders “step in, step up, or step away,” but ABC has already posted polls on its website.

The overwhelming majority of respondents responded to the poll question, “Would you try to convince a vegan family to feed their child meat?” with the answer, “No, I think vegan food is a healthy option for children.” But it’s definitely a controversial issue.

Less controversial is whether the hotdog the intervening couple orders for the little girl is actually “good for you,” as they say. Hotdogs aren’t “good” for anyone, vegan or not.

But is it child abuse, as the intervening man suggests?

In my (humble, vegan) opinion, that’s a ludicrous suggestion. It’s impossible to bring up child abuse with regard to diet without acknowledging the childhood obesity epidemic in the United States, a growing problem that is certainly not the result of veganism.

Childhood obesity is one of the most complex health and social issues in this country, and I’m not suggesting that parents who raise their children on a diet that contributes to obesity should be accused of abuse (though some have). But let’s keep some perspective, here.

Just like any parents, parents who choose to raise their children on a vegan diet ought to take care that they are getting all the B-12, calcium, iron, Vitamin D, and protein they need. The website EatRight.org offers some guidelines for raising kids on a vegetarian or vegan diet.

Watch What Would You Do? On Friday night at 9pm if you’re interested in seeing how the bystanders at the Mason Jar Grill react. My guess: the vegans win.
Posted by Unknown at 1:42 PM 2 comments:

Email ThisBlogThis!Share to TwitterShare to FacebookShare to Pinterest
Labels: ABC, child abuse, vegan, vegan children, What Would You Do

Somehow, despite my utter lack of anything resembling interest in football, I have found myself invited to a Super Bowl party. It’s my first Super Bowl as a vegan (not that I’m using Super Bowls as life benchmarks or anything), and so I have to wonder: on a day when productivity, marriages, and human decency are sacrificed for love of football and greasy, cheesy, meaty snacks… what is a vegan to eat?

Just because some guys on TV are tossing around a pigskin, doesn’t mean you have to be eating the rest of that pig in the form of bacon bits as you watch from your couch. If you have the time and ambition to whip up something fancy, check out Ecorazzi's list of Super Bowl vegan recipes.

But what if you are lazy? Or what if you have a vegan coming to your non-vegan Super Bowl party and you want to make sure she doesn't starve to death (but you don't like her enough to go to the trouble of preparing an elaborate vegan meal option)? Well, here are five ideas for simple, vegan-friendly snacks to enjoy this Sunday:

1) Potato Chips
This one’s not surprising, since the only ingredients in most brands of potato chips are potatoes and astonishing amounts of oil. Just make sure your potato chips aren’t made with animal fat, and you’re good to go.

2) Guacamole
Check the ingredients if you’re buying a tub from the store, or make your own by mashing up a few avocadoes and tomatoes and adding lemon juice and salt. Tortilla chips for dipping are usually vegan, too!

3) Veggie Platter
I know, I know, no one likes the person who brought the veggie platter, especially if there's no Ranch dressing. But if you’re okay with being a stereotypical vegan, go for it.

4) Fruit Kebabs
Unlike veggie platters, people will actually eat your fruit kebabs. Spear pineapple chunks, strawberries, blueberries, melon, or whatever fruit is in season and arrange the kebabs on a plate. If you want to get fancy, mix some lemon or lime juice into plain soy yogurt to make a tasty dipping sauce.

So what if my 2012 Super Bowl experience is bound to revolve around waiting for a close-up of Tom Brady’s butt face? At least I’ll have snacks.
Posted by Unknown at 9:54 AM 1 comment: