I am a vegan opera singer. That never struck me as a strange combination, especially since my friend Sasha has told me about at least one other opera singer who, though not a vegan, comes up with a bunch of tasty vegan recipes. I guess the stereotypes don't mesh: vegans are supposed to be stick-thin and generally chilled out, while opera singers are supposed to be obese and high-strung. But I just discovered an even weirder combination: a vegan black metal chef. 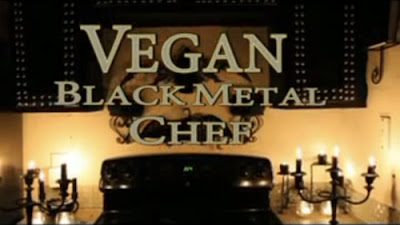 His name is Brian Manowitz, and he recently posted an instructional video in which he prepares pad thai. But he narrates in a scary, growly voice over what is, I assume, generic black metal music. The best part is his costume: he is dressed up as (and this is just a guess) Lucius Malfoy at a KISS concert. And he uses terrifying weaponry instead of regular cooking utensils to do things like slice his tofu and stir his sauce.

This hilarious little video has gotten a lot of attention. I'm not sure why the combination of vegan + black metal seems so ridiculous; it might be because of the rumored animal sacrifices that took place back in the day at Ozzy Osbourne concerts. But apparently, there is a whole subculture of vegan and vegetarian black metal listeners. Who knew.


Above all, I really respect this guy's eyeballing skills. He doesn't measure anything. It means that you have to be watching the video while you prepare the recipe, so you can put in the same amount as he does.

I can't try out this recipe yet since I've given up peanut butter for Prarial, but I like pad thai and I'm excited to make "the best pad thai sauce ever." I don't think I'll press my tofu into the symbol of the ancients, though, and I'm certainly not going to use any chilli powder (my tolerance for spice is the only thing lower than my tolerance for black metal music).

As a vegan, I am excited. As a singer, I am concerned. As I (fittingly?) head out the door to sing at church, I feel obliged to send Brian Manowitz a letter that says something like:

Dear Vegan Black Metal Chef,
Please stop destroying us.
Love,
The bloody stumps that used to be your vocal chords
Posted by Unknown at 8:28 AM