My 5-year college reunion is coming up in a couple of months and, because one weekend of aggressive hand shaking and pretending to remember people’s names isn’t enough, there are a bunch of small-scale events happening at cities around the country leading up to reunion weekend.

Despite feeling nauseating slight social anxiety about the whole thing, I’ve seen enough romantic comedies to know that school reunions are full of people having crippling breakdowns and getting punched in the face by former rivals. Like I would miss that kind of drama!

So last week, I headed down to LA to visit my beautiful, financially stable friend Avery and hit up the Harvard Class of 2008 lead-up-to-the-actual-reunion event at the Churchill, a rather trendy (technically not in) West Hollywood bar. We spent the evening trying to be prettier than we had been in college and exchanging thinly veiled assertions that we had spent the past five years succeeding wildly at life and definitely not blogging for no money.

Actually, it was quite a good time, and after a few too many drinks, I was having enough fun to forget my credit card at the bar. That meant that the following morning before driving back up to Santa Barbara, I got to sit in LA traffic (which actually made me a bit nostalgic for my Venice Beach days) on my way to retrieve my credit card from the Churchill.

And that’s what brought me to Clover. When I called the manager of the Churchill to see about my card, he said to pick it up from him at the “little window” next door. Turns out, that “little window” was Clover, a brand new juice bar serving breakfast, lunch, “late-night” snacks, and Stumptown coffee, too.

The folks at Clover source all their juice ingredients locally and change up their offerings according to the season. The food menu, which includes a lot of vegetarian, vegan, and gluten-free options, is whipped up by Churchill executive chef, Bruce Kalman; pastries and other sweets are created by Lauren Lobley of Charm City Cakes West.

I was served my $8 breakfast sandwich by Kimberly, who told me that the Churchill’s co-owners, Cassandra and Andrew Walker and Beau Laughlin, are the ones behind Clover, too. Here’s what my breakfast sandwich looked like right before I devoured it in my car: 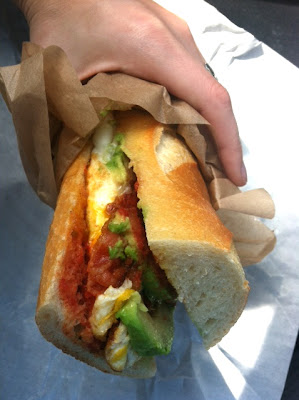 It was exactly what you would want in a breakfast sandwich: eggs, avocado, bacon, and a special tomato jam. But it was especially delicious because the ingredients were practically oozing freshness. It makes an incredible difference when food is made with local, fresh ingredients, no matter how simple the meal.

If you can’t make it to either the La Brea or West Hollywood location, don’t lament - unless you don’t have an internet connection, either. Then you can go ahead and lament. How are you even reading this post? - because beginning this month, you’ll be able to order Clover juices online by the bottle or in “seasonal kits” of four different juices. You can even do a “cleanse” by ordering enough juice to subsist on for 1, 3, or 5 days ($70-350) depending on your level of insanity dedication.
Posted by Unknown at 8:44 AM