Before I was a vegan, I used to get quite excited about prix fixe menus. For those of you less cultured than I, “prix fixe” means “fixed price.” So for a prix fixe menu, you pay a certain amount and you get a three or four course meal. Sometimes you have a choice between two or three items for each course.

I recently discovered that the reason we in the States use the French term “prix fixe” is because over in France, almost every restaurant offers a prix fixe menu every night. Even random, sloppy-looking joints have a chalkboard outside the front door announcing the prix fixe menu for the evening.

In the States, however, “prix fixe” usually means the same thing as every other French term: “fancy pants.” Expensive restaurants will offer special prix fixe menus for Valentine’s Day, Mother’s Day, and other occasions on which objecting to the absurd fixed price makes you feel cheap and like you don’t love someone enough.

My problem with prix fixe menus is that they are rarely vegan. If the average person is paying $100 for three courses, one of those courses better be a steak.

So imagine my delight when I found out that VeeVee, a cozy establishment in Jamaica Plain, offers a vegan prix fixe menu every Wednesday! I would have paid any amount to try it (within reason), but luckily it only cost $25.

I went with Amy, who was staying with me at my parents’ house for a few nights before starting work in DC, and my friend from college, Alex, who is gluten-free and mostly vegan.

Amy and I had proven ourselves decidedly un-fancy by taking every form of public transportation Boston has to offer to arrive at VeeVee. After having been squashed up against a sweaty shirtless man making racist comments on the bus and taking the orange line to Green Street (a stop at which drive-by shootings don’t not happen), I was ready for a dose of classiness. Especially if it came with deliciousness.

And I was not disappointed! The first course was a farro salad with cucumber, corn, cherry tomatoes, and some unidentified greens. Don’t worry, I didn’t know what farro was, either. Turns out it’s a whole grain form of wheat that’s good to eat hot or cold (in this case, it was cold). 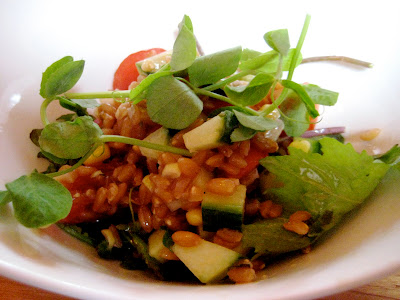 The entrée was warm black lentils with olive oil croutons surrounded by cauliflower puree. Those croutons were amazing. It was one of those meals during which you keep looking up and making eye contact with the person across from you (in this case, Amy), confirming the intensity of your shared flavor experience with nodding and raised eyebrows. 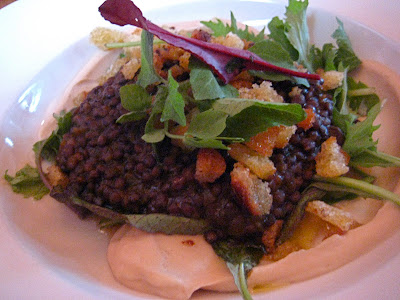 And for dessert: ice cream made of coconut milk in a chocolate ganache with toasted coconut shreds and mango slices on top. 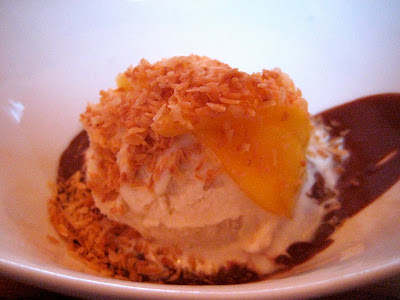 By the time it was all over, I was wishing I had another Wednesday evening in the Boston area so I could come back. And my fancy quotient was through the roof.
Posted by Unknown at 5:44 PM