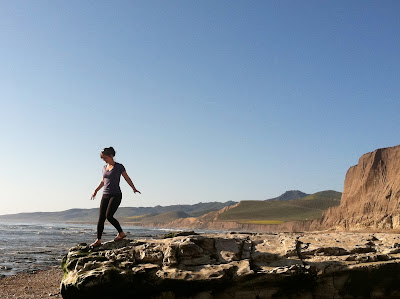 Exactly a year ago, I decided to become a vegan. I was motivated by my environmental and economic beliefs, and by what promised to be a challenge. I was excited for what I saw as a lifelong adventure ahead of me.

But I knew I was taking a risk by adhering to a diet that would require me to restrict my food intake. I suffered from a pretty gnarly eating disorder during college, and even though I’ve had a healthy relationship with food for over five years, I knew I’d have to take careful note of any weird habits that seemed to be resurfacing.

Well, a few weeks ago, my roommate Erin had some friends over for dinner. They were going to have homemade pizza; though Erin encouraged me to hang out at the house and be social, she apologized that the pizza dough wasn’t vegan. I said I’d just go to a coffee shop and get some writing done rather than join them for dinner. As I walked to the coffee shop, I became aware of a disturbing feeling. I was glad the pizza wasn’t vegan because it meant I couldn’t eat it, and thus I didn’t have to eat dinner.

I could skip dinner and nobody would notice. That thought might seem inconsequential, but it was a huge red flag for me. It was an impulse to use my very public veganism to mask a very secret anxiety about food.

When similarly unhealthy thoughts popped into my head in the following weeks, I took note. And I decided that while veganism has been conducive to my physical health (and the physical health of countless animals, I like to think), at this point in my life, it was threatening to my mental health. I like food. I want to keep liking food. And sticking to any kind of restrictive diet is not the best decision for me.

Emphasis on for me. I am not suggesting, in any way, that veganism is an eating disorder, or that vegans develop eating disorders any more frequently than anyone else. In some cases, though, veganism and vegetarianism can be used as a cover for an eating disorder; Canada’s National Eating Disorder Information Centre published this article about it a couple years ago. (For more about eating disorders in general, visit http://www.nationaleatingdisorders.org.)

I knew that Meghan the Veghan would have to become Meghan the Post-Veghan. But I wanted to continue to eat in a way that reflects my environmental and economic concerns. And it’s not like I could ever get tired of writing about myself...

So from now on, I’m going to do my best to buy local groceries, eat at restaurants that use local ingredients (there are a ton of them around Santa Barbara), and learn as much about my food as possible. And I’m going to blog about it. I hope my followers, vegan and non-vegan, will continue to support me! I know this post has been kind of a downer, but I’ll be back to myself once I get writing about my adventures in local eating.

By “local,” I mean food that I could feasibly go get for myself (and I don’t mean by walking to the supermarket). There is a farmer’s market almost every day of the week here in Santa Barbara, so it will be pretty easy to get local groceries. I might even start a little garden (or I might just mooch some produce from my landlady’s garden; I haven’t decided).

It’s been a good year. But as much as I’ve enjoyed my vegan adventure, I have missed eating certain things. And by “certain things,” I mean bacon.
Posted by Unknown at 9:00 AM