My newest discovery came before a dinner date with my friend Sasha. We were perusing the market for ingredients to make a tasty meal when we found what looked like a cross between a summer squash and a pumpkin.
Turns out, these little nuggets are neither of the above: they’re cucumbers! Lemon cucumbers, to be exact. Despite what their name suggests, lemon cucumbers are not the creation of a mad scientist who wondered what would happen if a lemon and a cucumber had a mutant baby. They’re just stout, yellow cucumbers that are kind of shaped like a lemon and grow during the summer.

Lemon cucumbers have a sweeter flavor than regular cucumbers, but have the same crisp texture. They’re also called apple cucumbers, since some people apparently have trouble distinguishing between lemons and apples.

The Milliken Farm stand was selling them for $2.50 a pound, so I bought a few. I’ve been feeling kind of anti-traditional-salad lately, but I couldn’t think of another way to use these midget cukes in a meal.

Then I saw the fresh mozzarella at the Spring Hill Jersey Cheese stand. They only had one package of it left, so I snatched it up quicker than you can say “mozzarella-ella-ella-ey-ey-ey.” I was going Caprese style on these cukes.

Caprese salad is usually just sliced tomatoes, mozzarella cheese, and basil drizzled with balsamic dressing and olive oil. It’s a refreshing, filling twist on a traditional salad and I basically subsist on it whenever I’m pretending to be in Italy.

So Sasha and I trekked home from the market and got to work slicing up fresh heirloom tomatoes, the Spring Hill mozzarella cheese, and the Lilliputian cucumbers:
I layered the slices with basil from my mason jar herb garden and drizzled some balsamic vinegar and olive oil on top: 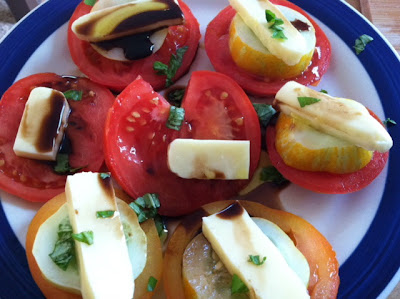 Yum! The cucumbers added a crunchy texture to the traditional Caprese salad. The difference in flavor from regular old cucumbers was just barely noticeable. So when it comes to cucumbers, does size matter? It depends on what you’re going to do with that cucumber.

I am assuming you’re going to put it in a salad, so the answer is nope! Size doesn’t matter. These pocket-sized little guys do the job just as well as their more common green cousins.
Posted by Unknown at 1:09 PM