Here's the Scoop (or Double Scoop, or Triple Scoop)

The summer after my sophomore year of college, I participated in my first opera training program in Siena, Italy. Since I spent a good portion of my days there nearly getting hit by tiny cars as I waltzed through the narrow city streets for miles at a time, being lost exploring – and since most of my college days for the months leading up to that summer had been spent lazing around on the banks of the Charles River with assigned reading in one hand and a solo cup of beer in the other – I assumed I was burning some mad calories.

As it turned out, I was gaining weight. That’s because, without fail, my excursions around the city included at least one stop for gelato. Per day. Frankly, I blame it on the Italian stallion who worked the counter at the gelateria on my block. He shouted all sorts of romantic things at me as I passed by, beckoning me in with calls of, “Ciao, Bella!” and other incredibly personal salutations. I mean, how could I resist?

I’ve since kicked my gelato habit, simply due to lack of supply. But while my family was visiting me here, I discovered a little gem hidden downstairs in a Montecito courtyard. It’s not just a gelateria, it’s a sorbeteria – that’s not a thing, is it? Well, they serve gelato and sorbet.

Here’s the scoop on Here’s the Scoop (see what I did there?). Ellie, who owns and operates the shop with her husband, Bob, was working the counter. She didn’t shout “Ciao, Bella!” at me, which was disappointing, but I went in anyway.
Ellie was delighted to tell me how she and Bob opened Here’s the Scoop nine years ago after working at fast-paced, high-paying jobs. They wanted to stay in town for their daughter Alex’s sake and they both really liked fancy ice cream alternatives, so they went for it and opened their own gelato/sorbet parlor. The sorbet is totally dairy-free: it’s just local fruit, sugar, and water. The gelato is, of course, quite dairy-dependent, made with certified organic milk and cream.

Ellie let us sample all the gelato we wanted, and we wanted a lot of samples. We’re talking Thin Mint made with girl scout cookies, lemon chiffon, and honey almond pistachio, just to name a few. I was transported back to that summer in Siena spent stuffing my face with every flavor imaginable (but mostly stracciatella, which is like vanilla chocolate chip if the vanilla was crack and the chocolate chips were also crack).

So it wasn’t surprising to learn that Ellie and Bob had traveled to Italy to do their gelato research and to buy a huge gelato-making machine, which they now use on the premises. After an embarrassing number of samples, I finally settled on strawberry sorbet in a chocolate waffle cone (which was also made by hand, in-house): 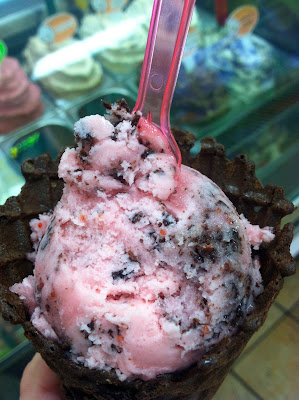 The best part about Here’s the Scoop is that Ellie makes all the sorbet with fruit from Shepherd Farms in Carpinteria. Almost all her fruit flavors change depending on what’s in season. Next month, she and Tom Shepherd are debuting a new flavor: carrot cake gelato, made with Shepherd’s Farms carrots.

I felt a little bad bringing my family to Here’s the Scoop. It seemed a bit like I was rubbing it in their gelato-and-sorbet-stuffed faces (faces that are currently wrapped to the eyes in wool scarves as they brave another Boston blizzard) that here in Santa Barbara, we have fresh local fruit all year round. And wonderful people like Ellie and Bob to turn it into sorbet.

I’m glad Here’s the Scoop is doing so well, and I’m also glad it’s all the way down in Montecito. Otherwise I’d fall right back into my old habits, grabbing a two-scoop cone to start my day and wandering through the streets of Santa Barbara, singing opera to myself like a crazy person, stopping every measure or so to eat a bite of gelato.
Posted by Unknown at 7:00 PM