Guess What I Wear as a Hat? A Lentil.

The title of this post is inspired by a hilarious stop motion animated film about Marcel the Shell (credit to director Dean Fleischer-Camp and writer/actress Jenny Slate). Marcel is a shell with shoes on, and she has a lot of great qualities, as you can see:

The lentil meal I just cooked was inspired by Amanda Ehrman and Isis Krause at GOOD. They've been posting delicious vegetarian lunch recipes every Tuesday and Thursday in 2011. They find soup and salad recipes, prepare them, then photograph and rate their results based on taste, cost, and prep time. It's a great idea, and really helpful for aspiring healthful eaters like me! I was excited about the recipe they posted for lunch today, Really Easy Lentil Soup, especially the "really easy" part.

I love lentil soup (my Nonna used to make killer lentil soup for me when I was little). So far in my vegan life, I've been pretty satisfied with heating up a can of Trader Joe's Organic Lentil Vegetable Soup. But the homemade version of things is usually better, so I decided to give this recipe a try. I had to make a trip to the Isla Vista Coop for some of the ingredients, but it was a gorgeous day out so I wanted an excuse to go on a walk anyway.

I changed the recipe posted by Amanda and Isis at GOOD in three ways. First, I had green garlic from the Community Supported Agriculture box, so I wanted to use that instead of purchasing cloves of garlic. Second, tomatoes are not in season here so I didn't want to purchase them (and I'm not a huge fan of tomatoes in soup, anyway). And third, I don't really like leeks, so I left those out.

I halved the recipe (because who needs 12 servings of lentil soup?) and ended up with:

I accidentally cooked it all in my wok (by accidentally, I mean I wasn't thinking and I'm inexperienced) but luckily, it all fit. I got thrown off by the first instruction, to "sauté" the onion and garlic in olive oil (obviously, I used my wok). Then the rest of the instructions just keep telling me to "add" things... so things got added to the wok. If you're making the full recipe, you should start by sautéing things in a pot that's big enough for all the soup to fit! After simmering for ten minutes, my soup looked like this: 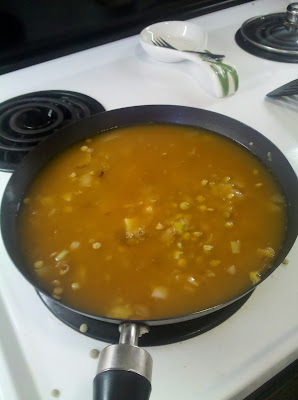 It made me nervous that the lentils weren't really absorbing the vegetable broth, but they still had another 20 minutes left to get their absorb on. I was rooting for them, and I even nudged them around a bit to get them going (not too much, though, because I didn't want my wok to overflow!). I ended up letting things simmer for about an hour total, because (as mentioned before), my stove is weak and it wasn't doing that great of a job simmering. Here's what I ended up with: 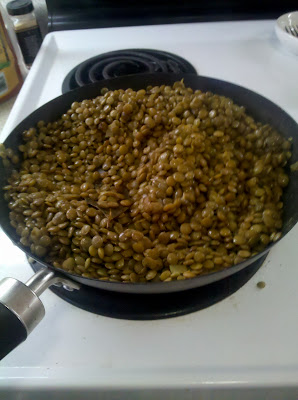 It was less like a soup and more like... a pile. A big pile of cooked lentils. In the future, I'll use more vegetable broth and learn how to simmer properly. But it still tastes delicious, thank goodness! And now I can have lentil soup whenever I want it, for the next year or so.
Posted by Unknown at 2:17 PM