German class is very meat-oriented. Basically all we do is talk about Wiener schnitzel and how lecker we find Schweinefleische. I have to assume that, aside from the airport, Germany has got to be the least vegan-friendly place in the world (if I ever find myself at an airport in Germany - and I actually hope that happens soon - I will make sure I'm carrying some CLIF bars). Anyway, spring quarter just started and this morning I went to the first meeting of my new German class. I knew that when I got home, I'd want to get excited about being a vegan again. So I decided to invent a recipe.

I don't often have real cravings for a certain type of food. The only items I can remember ever having cravings for are peanut butter toast (but that goes without saying), 100% pure maple syrup, and smoothies. For the past few days, I have had smoothies on the brain, and I've been searching around online for a vegan smoothie recipe. After collecting some ideas, I decided to invent my own. Here it is! It's very simple, I know, but give me a break. It's the first recipe I've ever invented.

I added the flax seed because, according to Wikipedia, flax seed has high levels of Omega-3 fatty acids. Since I'm not eating fish or eggs anymore, I need to stock up on that stuff however I can. While I was on Wikipedia, I decided to do a little research for an academic paper that's due in less than an hour. Just kidding! That would be ridiculous. (Note to my students... ahem.)

Back to the delicious smoothie I just made. My roommate Emily had the brilliant idea to freeze the fruit overnight, so I wouldn't have to use ice this morning. Ice can make a smoothie taste more like a slushie, so I decided to freeze the fruit and skip the ice. Another option would be to use bags of frozen fruit. Here's my fruit all cut up and looking delicious, pre-freeze: 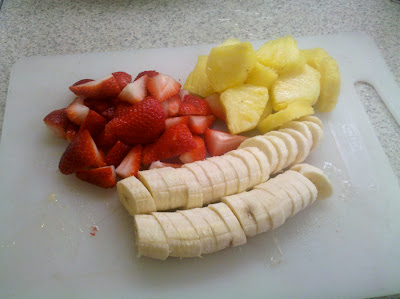 When I took it out of the freezer in the morning, it had all congealed into one big strawberry-banana-pineapple chunk: 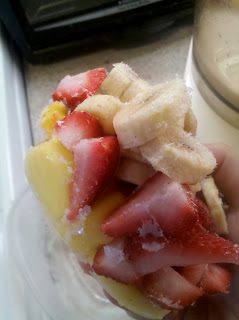 Yum, right? I had to break it apart with my hands to stuff it into the food processor, so in the future I think I'll try freezing the fruit in an ice cube tray. That way it will be in manageable little frozen pieces and much more food processor friendly. The finished product looked like this: 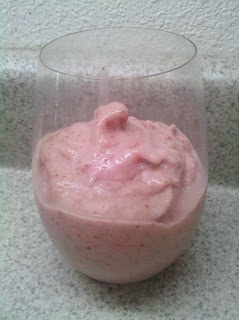 There was a lot more smoothie where that came from, so I put it in the refrigerator for later. I could really taste the agave syrup - non-vegans could use honey as a substitute - and it added a sweet kick. The smoothie was a little thick, though, so I had to use a spoon. In the future, if I want to make a smoothie I can drink with a straw, I'll use more almond milk.

And in the spirit of German class, here's a recipe I found on Veganbaking.net for Austrian apple strudel: Vegan Apfel Strudel.
Posted by Unknown at 3:55 PM