People sometimes say, “You have to crack a few eggs to make an omelet.” I think that’s just another way of saying sometimes you have to get through tricky and/or nasty things in order to accomplish something good. I tried to keep this in mind as I failed to make an omelet yesterday; instead, I just told myself I was making a very successful scramble.

At first I thought it was because I’m out of practice, but now it’s time to admit that I am just not any good at making omelets. First of all, there’s no way I’m cracking eggs without getting some shell in the mix. That’s a given. I usually spend about a minute and a half trying to fish out the bits of shell before coming to terms with the idea of eating eggshells.

Once I’ve compiled the omelet in the pan, flipping it is another hurdle. Assuming I’ve greased the pan enough (which is a generous assumption), it’s unlikely that I’m going to get enough leverage with the spatula and choose just the ride midpoint so that the omelet looks… well, like an omelet instead of like a mess.

Making a sad-looking omelet is a depressing experience, so I’ve learned to avoid it by opting to make scrambles instead. Because what is a scramble if not a failed omelet? Set your sights low, that’s what I always say.

Yesterday I decided to use a bunch of fresh, local ingredients to make a delicious scramble. Here’s what I used: 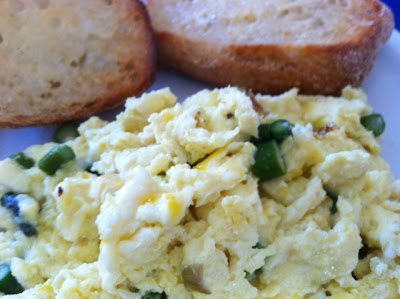 I used Lily’s free-range, organic eggs from Fillmore, California (distance from me: 52 miles). Lily’s eggs is a company run by Robert Tropper and Diana Tuomey, who value the happiness of their chickens and treat them like pets. The chickens to run around their farm, snacking on earthworms, wheat sprouts, soybeans, and corn. Oh! And not being killed, since the farm is purely for egg production.

The asparagus came from Melendez Farm in Santa Maria, California (distance from me: 63.5 miles). Luis Melendez has been farming at this location for over twenty-four years. He and his sons, Hector, Mario, and Mike, grow all sorts of different vegetables on their twenty-five acres.

The raw white cheddar cheese, which has become a favorite of mine, was from Spring Hill Jersey Cheese. I wrote a post about Spring Hill a few weeks back.

After mixing the eggs (and, who am I kidding, some shards of eggshell) with the milk, I poured them into a large frying pan over a low flame. It’s important to make a scramble over low heat in order to cook all the eggs evenly. If you think I didn’t learn that the hard way, you don’t know me at all.

When the eggs started to congeal, I added the chopped asparagus and cheddar cheese and a pinch of salt. I mixed the scramble by kind of folding it over itself, over and over again. It was much easier to deal with than flipping an omelet would have been, and I think I pulled it off nicely.

I served it (to myself) with a roll of rustic bread from Solvang Pie Company (distance from me: 33.2 miles). This rustic bread was one of my staples when I was a vegan – it’s made without eggs or whey.

I know it sounds cliché, but here goes: using fresh, organic ingredients makes a huge difference in the taste of a meal. It can turn a boring old failed omelet into a tasty scramble. So if you must crack a few eggs to make an omelet (and yes, you must), make sure they’re free-range, organic eggs.
Posted by Unknown at 1:43 PM