When You Steal Lemons from Life, Make Lemon Squares!

The other morning while eating breakfast on David’s patio, I noticed a lemon tree growing in the corner of his backyard. Well, calling it a “tree” might be giving it a little too much credit. It was more of a lemon bush; it barely came up to my waist: 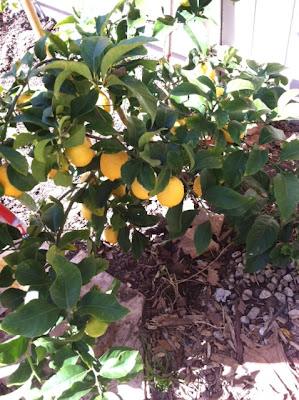 It was downright laden with lemons. I wanted to take them all. Food doesn’t get much more local than lemons stolen from your boyfriend’s backyard. So I headed home with a huge bag full of lemons. I plopped it down on my kitchen floor and then immediately began to wonder what on earth I was going to do with all those lemons.

I’ve heard some annoyingly perky people say, “When life gives you lemons, make lemonade!” But as it turns out, you only need about two lemons to make a whole pitcher of lemonade. That wouldn’t make a satisfactory dent in my giant bag of lemons. 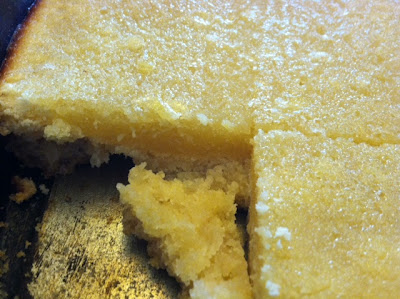 First, I preheated the oven to 350 degrees. To soften the butter for the crust, I stuck it in the microwave… in the metal mixing bowl. The answer to the question, WHAT WERE YOU THINKING?! is that I wasn’t thinking. I spend a good portion of my life simply not thinking at all, and this was one of those moments.

It was only when I heard popping noises and smelled burning that I realized I had broken the Number 1 Rule of Being a Grownup in the Kitchen: Don’t put metal in the microwave. Luckily, I rescued the butter before the metal mixing bowl exploded and killed me and/or ruined my microwave.

I mixed in 2 cups of flour and ½ cup of sugar, then patted it into the bottom of an ungreased 9x13 pan. By this time, the oven was ready. I baked the crust for 20 minutes, until it was golden brown.

While it baked, I got to work on the goopy part of the lemon squares. I whisked together 1 ½ cups of sugar and ¼ cup of flour in another mixing bowl, then added the eggs and the lemon juice.

I started to just squeeze the first lemon directly into the mixture, but realized quickly that if I kept it up, my lemon squares would be full of seeds. I’m always one for a good surprise, but I don’t think breaking a tooth on a rogue lemon seed while eating dessert counts as a good surprise. So I squeezed the lemons into a little cup first, removed the seeds that accidentally got in there, and then added the juice to the mixing bowl.

When the crust was done baking, I removed it from the oven and poured the mixture on top of it as evenly as I could. Then I put the whole thing back in the oven for another 25 minutes. When I removed the tray from the oven, the lemon squares still looked a bit goopy. But they firmed up as they cooled down.

They have just the right texture and they taste perfect: lemony, but not too lemony. I still have a big bag of lemons in my kitchen, though. I’m not sure what to do with the rest of them – ideas are welcome! 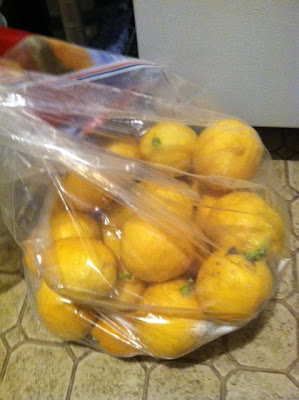