One of my parents’ favorite stories to tell at family dinners involves raw milk. We were living in Germany when my siblings and I were quite young. On a road trip through a rural area of the country, we stopped for a meal at a tiny farm. My mom asked the proprietor if she could have some milk for my little brother, Brian, who was a baby at the time.

The proprietor disappeared for about a half hour, during which time my parents couldn’t help noticing a distinct moooooing coming from outside. Finally, the man returned with a bucket of warm milk, which my parents could only assume had been extracted within the past half hour from a cow’s udder.

And that’s how my baby brother got mad cow disease.

Just kidding! My parents weren’t on crack. But that story is always greeted by laughter, groans, and expressions of disgust. Why are we grossed out by milk that comes directly from a farm cow, without pasteurization or additives, but not by milk that has been pumped by huge machines from incredibly cramped, force-fed animals on factory farms?

It might be because “raw” milk can be contaminated with all kinds of things. But nowadays, dairies that produce raw milk in the United States are held to stringent testing standards. And because of the enzymes raw milk contains, it can be used as a tool to strengthen human immune systems.

So this week, I decided to try raw milk for myself. At the Saturday farmers market, I struck up a conversation with Nathan Glazebrook at the Organic Pastures farm stand. He told me that Organic Pastures, located near Fresno (distance from me: 232 miles), has been owned and operated by the McAfee family since 2000. They produce raw milk, butter, cream, cheese, as well as organic beef, raw almonds, and eggs.

Their cows graze in green pastures every day of the year and are never given antibiotics, hormones, or GMOs. They’re only fed things they would naturally choose to eat (so never soy or cotton seed). As a result of their lifestyle, the cows can live more than four times longer than their counterparts on factory farms.

My perception of these people as badass was slightly shaken by the McAfee family photo on the homepage of their website, which seems to be a recreation of something from Mitt Romney’s campaign brochure. But so what if they coordinate wholesome outfits and pose in a field surrounded by grazing cows and human-sized bottles of whole milk? I’d do the same thing if I had human-sized bottles of whole milk lying around.

Especially if it was from Organic Pastures. This stuff is delicious. I bought a quart of whole milk after trying a sample of it at the farm stand. It’s hard to describe how it tastes different from pasteurized milk from factory farms, but somehow it tastes fresher and smoother. 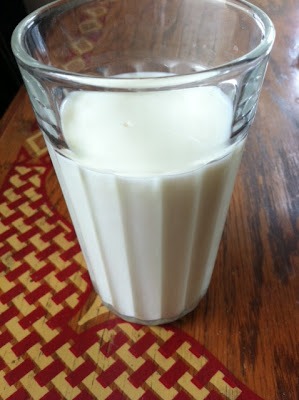 I was a bit nervous to try it because my stomach is pretty much always in a bad mood, and I thought that introducing raw milk might provoke a rebellion. But my stomach did not rebel – in fact, I didn’t experience any negative effects at all.

My budget can’t really support a raw milk habit, but I’ll definitely return to the Organic Pastures farm stand on special occasions. For instance, when my little brother Brian comes to visit, I’ll take him there to try to recreate that traumatizing raw milk childhood memory. Brian: you’re welcome.
Posted by Unknown at 10:42 AM