While I was in college, I subsisted mostly on peanut butter toast. Sometimes I ate bacon, too, when I made it downstairs to the dining hall in time for breakfast. But that’s because Clover Food Lab didn’t open until the year I graduated, 2008.

It was founded by MIT graduate Ayr Muir, who wondered whether “fast food” always had to be greasy and mass-produced. He decided that no, it did not, and now there are Clover Food Lab food trucks and permanent locations all over Boston and Cambridge.

I noticed the Harvard Square location just before heading into nearby Finale for a four-course family dessert excursion, so I called my friend Adam and asked him to meet me at Clover Food Lab for dinner afterward. Like I always say whenever someone gives me a dessert: eat dessert first.

Adam loves Clover Food Lab, so he biked over in a severe thunderstorm to meet up with me. My sister and her friend Claudia joined us, too. We ended up stranded inside the restaurant while the storm passed, but that was fine with all of us, since it was a pretty fun place to be stranded. 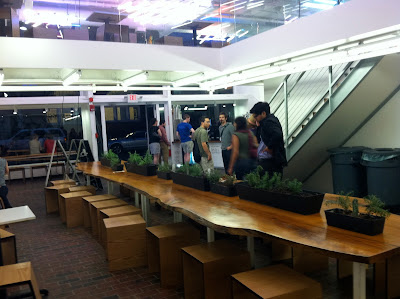 At Clover Food Lab, they serve sandwiches, soups, and salads made from all local, mostly organic ingredients; fair-trade, locally roasted coffee; and they just got Allagash Belgian-style beer from Portland, Maine (distance: 111 miles) on tap at their Harvard Square location - for just $3!

The company slogan, “Everything Will Be Different Tomorrow,” is one of those awesome sayings that manage to be physically obvious and philosophically inspiring at the same time.

Their sandwich-style, screen menu supports that slogan: it can update itself at any minute, and then maybe that soy BLT you wanted won’t be available anymore (!). 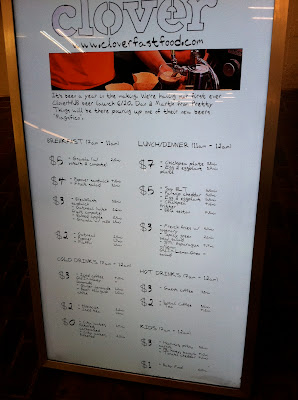 Next to each menu item on the screen is listed the expected amount of time it will take to prepare it, from the moment the order is entered into the cashier’s iPhone until the moment it is delivered to your hot little hands.

That’s right – the moment it is entered into the cashier’s iPhone. Because the cashier wasn’t really a cashier, strictly speaking. Her name was Laurel, and after she entered our orders into her iPhone and swiped our credit cards (also with her iPhone), the orders were sent to the iPhones of the cooking staff right behind her. She didn’t give us a receipt – they’re basically paperless, except for rolls of recycled paper available for particularly artsy customers to draw on (or perhaps use as a place mat). 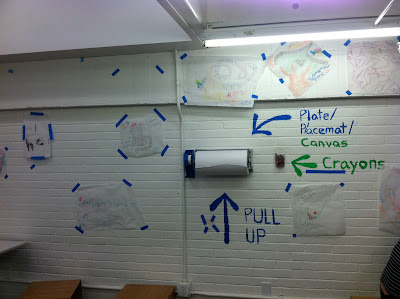 I ordered the chickpea and vegetable sandwich, which Laurel recommended as their most popular menu item. It was a huge sandwich for the price, tasted fresh, and looked quite colorful: 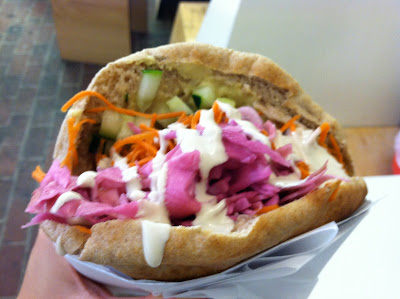 My sister just ordered a side of spicy green beans, since she was full of dessert and has a less ambitious stomach than I do:
Claudia ordered their seasonal sandwich of roasted parsnips and spinach: 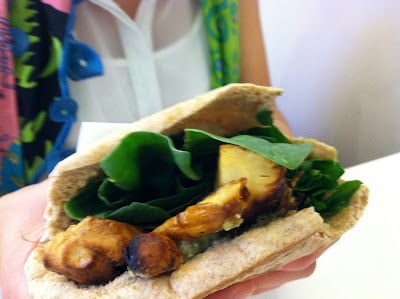 It took them about eight minutes to call her name – apparently, this was about three minutes too long (according to the preparation time listed on the sandwich-board menu screen), so they gave us free fries!

The French fries are sprinkled with the rosemary growing all around the restaurant. That’s about as local as you can get. 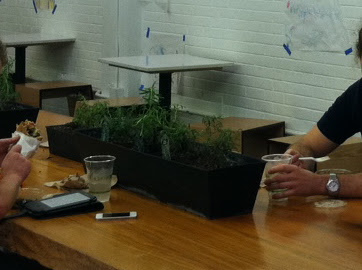