Are you going on a road trip? Prepare to lie to your Weight Watchers journal. Because I can't think of many places with fewer healthful food options than highway rest stops. Maybe the circus, or a county fair in middle America.

Last week, I was driving my sister back to her hippie-dippie 'hood on the western edge if Massachusetts - it wasn't quite a road trip, but we had to stop for a bathroom break.

We were on the Mass Pike - Route 90 - which, for the uninitiated, is a toll road that runs east to west across the state of Massachusetts (and, eventually, across the border into the randomness of upstate New York). You can take "the Pike" to get to Worcester, Leicester, and other towns whose names you can't pronounce.

Well, we pulled into the rest stop in Charlton, expecting to use the restroom (as the name "rest stop" implies one ought to do) and maybe grab some almonds from a vending machine.

Then what to my wondering eyes should appear... but a miniature farmers market! And eight tiny reindeer. (Just kidding about the reindeer.)

There on the side of the highway stood a small collection of farm stands, looking as out of place as a scone on the middle tier of a curate stand at afternoon tea. I mean, really.

As it turns out, the Massachusetts Department of Transportation (MassDOT) has reserved space for local farmers to sell their goods at rest stops since 2000. Not many vendors have taken advantage of this opportunity, but those who have are glad: Darlene at the Gilmore farm stand (the farm is in the same city as the rest stop, Charlton) said she gets so much business at the rest stop, she doesn't need to sell at any other markets. 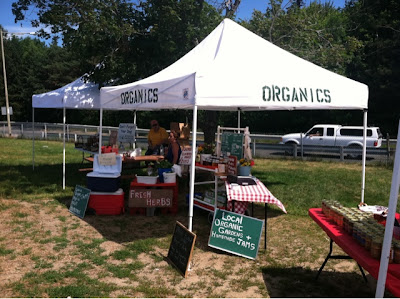 My sister eats fruit like most people breathe air: she inhales it, and she doesn't think much about doing it. So she bought a crate of blueberries from Gilmore Farm and ate pretty much the entire thing before we reached our destination.

I was looking for a more substantial snack, so I went over to chat with Kevin at the Berkshire Grain stand. All his granolas are kosher, made with unrefined sugar, and have fun names. For instance, the Tangleberry mix (named for the Tanglewood summer music festival in Lenox, where Berkshire Grain is based) is "child-friendly," meaning it does not contain nuts.

(Side note: why are so many kids allergic to nuts these days? Remind me to ask a stand-up comic; I'm sure they'll have an answer.)

Kevin gave me a sample bag of the cranberry pecan granola, and it really hit the spot. I felt it was an appropriately earthy crunchy item to snack on as I continued on the drive to Northampton, Massachusetts, conservative Republican population: negative a billion.
Posted by Unknown at 10:29 PM