In Defense of Locavorism: Let's Cultivate Our Garden 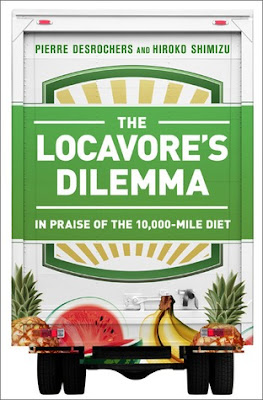 In The Locavore’s Dilemma: In Praise of the 10,000-mile Diet, a controversial response to Michael Pollan’s 2006 book The Omnivore’s Dilemma, Pierre Desrochers and Hiroku Shimizu take a stance against the locavore movement. Yesterday, The Daily Beast promoted The Locavore’s Dilemma in a post entitled, “Why Locavorism Doesn’t Make Us Happier, Healthier, or Safer.”

Desrochers’ and Shimizu’s main argument is against the idea of “food miles,” or the distance between the farm and the consumer’s plate, as a proxy for greenhouse gas emissions. Citing many Life Cycle Assessment (LCA) studies, they point out that:


As American researchers have documented, in their country the “food miles” segment (from producer to retailer) contributes only about 4 percent of total emissions related to what Americans take home in their grocery bags, while 83 percent of households’ carbon dioxide footprint for food consumption can be traced back to the production stages.

Since “food miles” aren’t traversed in a vacuum, other environmental factors have to be taken into consideration when making dietary decisions. Unsurprisingly, certain climates are more suitable for the production of certain foods (fruits, for example). So building a greenhouse where you can grow peaches during winter in New England is less environmentally sound than just transporting those peaches from across the country. I think that would make sense to most locavores.

The Locavore’s Dilemma is well-researched and well-written, and I’m glad it exists. Locavorism is one of those ideas that seem to make sense on a gut level, and ideas like that always deserve to be challenged.

But I take issue with the book on many fronts, including its understanding of most locavores’ motivation. Desrochers and Shimizu assume people who value eating locally produced food over food that has traveled long distances want to impose their dietary habits on everyone on the planet, at the expense of social and economic logic.

Do I think a financially struggling person living in Santa Barbara should attempt to maintain a vegetable garden rather than buy cheap meals at a fast food chain? Yes. Do I think starving families in Haiti should refuse food drops from the U.S. because of the carbon emissions of the planes that delivered them? No. Is it time to stop employing the overused rhetorical device of asking myself questions with obvious answers? Probably.

But the most problematic implication of The Locavore’s Dilemma is evident in The Daily Beast’s defense of it. That is the argument that the food production/consumption situation that exists today is better than any imagined alternative simply because it is what exists today. Huge factory farms have beat out small, family-run farms largely due to government subsidies; presumably, by virtue of that economic victory, they are better for the world we live in today.

That Panglossian mindset strikes me as a grand excuse to be lazy. For all his faults, Voltaire seems to have had at least one thing right: we don’t live in the best of all possible worlds. So let’s cultivate our garden.
Posted by Unknown at 8:30 AM