Sugar and Salt and Everything Nice

I scream, you scream, we all scream when we realize just how many calories we’re shoveling into our mouths with every spoonful of ice cream. Given how delicious it is, it seems supremely unfair that just one half cup of ice cream – and who eats just one half cup, ever? – has about 20% of the total calories most women need in a day… and 100% of the fat.

(I am so sorry if you’re reading this post while enjoying an entire pint exactly one half cup of ice cream. Please forgive me for ruining it and continue reading.)

Lots of foods have lots of calories and lots of us just do our best to avoid those foods. Ice cream, though, is particularly difficult to resist because it makes you feel so goddamn nostalgic. If you can watch the ice cream truck turning the corner – covered in half-peeled-off stickers of multi-colored popsicles, its incessant chiming music made slightly creepy by the Doppler effect – and not experience the urge to chase after it on your bike with a dollar crumpled up in your fist, well, I would argue that you had no childhood.

I did have a childhood and I sure took advantage of it: on more than one occasion, my siblings and I didn’t make it to the ice cream truck in time and whined until our dad agreed to chase it down in our family minivan. (I am not making that up... so yeah, thanks, Dad.)

So when I saw what appeared to be a particularly classy ice cream truck at the SOL Food Festival here in Santa Barbara, I headed straight for it, my childlike excitement only slightly dampened by a certain amount of calorie-guilt-preparation.

That nagging guilt dissipated, though, when I realized that this wasn’t an ice cream truck after all; it was a refurbished 1966 mail truck, offering ice cream’s hippie health-nut cousin: locally sourced, non-dairy sorbet!
I chatted to John, the founder and co-operator of Sugar and Salt Creamery, who was standing near an adorable sandwich-chalkboard (chalk-sandwich board?) advertising the day’s flavors: 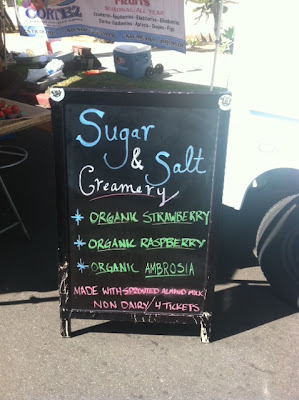 The Sugar and Salt Creamery truck parks at local events like the Art Walk on Sundays and the Farmers Market on Tuesdays and Saturdays, as well as at Butterfly Beach on Fridays. They’re also expanding their business to local retailers like the Isla Vista Coop, in case you’re not in the mood to hop in your minivan and chase them down.

I ordered the raspberry flavor and was handed a small serving which, if I had to guess, was probably just one half cup:

If this looks like a very tiny serving of sorbet, believe me: it looked the same in person. But amazingly, it was enough. And this is coming from a girl who once finished an entire pint of Chunky Monkey while sitting cross-legged on the floor and watching America’s Next Top Model (the irony was not lost on me).

The combination of almond milk and fresh fruit made the Sugar and Salt sorbet really special and satisfying, rather than just a less-filling stand-in for ice cream. It was sweet and nutty at the same time, and the texture was creamy but not too heavy. Bonus points for the baby spoon hidden in the bottom of the lid.
Posted by Unknown at 9:07 PM