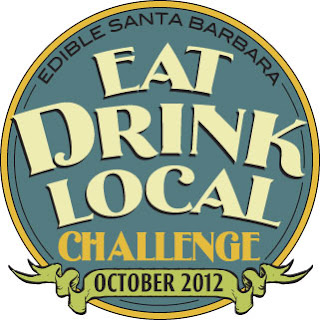 I've gloated about this many times, but just for the record (in case you're keeping one): I'm lucky enough to live in Santa Barbara, where it is particularly easy to eat locally grown and produced foods. It's the reason an otherwise lazy person like me can dedicate an entire blog to my adventures eating local foods and reviewing restaurants and other establishments that use local ingredients.

But sometimes it's just easier to heat up a can of soup or pick up a packaged meal at an inexpensive market. I've been in the process of moving into a new place over the past couple of weeks, so the time I can dedicate to planning local shopping trips and preparing meals using local ingredients has been more limited than usual.

Recently, I read about a project that is just the inspiration I need to get back on the proverbial track. Edible Santa Barbara, my favorite publication ever in the history of time, is sponsoring its 4th annual Eat Local Challenge in conjunction with the Community Environmental Council and the Santa Barbara Farmers Market.

Santa Barbarians (who are generally not as barbaric as they sound) are encouraged to pledge to eat only locally grown and produced food for the month of October. They can set their own limits: "local" can refer to only Santa Barbara proper, or the tri-county area, or all of the state of California. Exceptions can be made for coffee, tea, and other addictions products that are not grown locally.

Although I already make a point of eating a local diet, there are certain products I consume on a near-daily basis that originated in the far-flung corners of the world. Here are a few of those products and how I plan to address them this month:

Coffee: Ugh. No, really, "ugh" is all I can physically bring myself to say on days when I haven't had my coffee. Teaching can be awkward, as can responding to sensitive questions like, "What do you think of my new outfit?" Ugh. Since coffee isn't grown in California, and since giving it up would mean wearing a month-long scowl and alienating my friends and colleagues with glares and half-articulated grunts, I thought I'd have to make an exception. But I recently learned that Goodland Organics is experimenting with growing coffee right in Goleta, California, and selling it at the Tuesday farmers market! I can't wait to pick some up.

Milk: There is no dairy in Santa Barbara county, but Lazy Acres carries milk from dairies in the nearby area. I am also a fan of Organic Pastures raw milk, which is sold at the Saturday farmers market. Don't cry over raw milk, that's what I always say.

Bread: I love the artisan rolls from Solvang Pie Company, and as it turns out, they're made from wheat grown in the Santa Ynez valley. Perfect.

Quinoa: This part breaks my quinoa-lovin' heart. Quinoa won't grow in California, since the climate won't support it. That means I'll just have to eat a lot more legumes. I'm going to try supplementing my veggies with pasta made from locally grown wheat from Solvang Pie Company.

So there you have it: my eating local plan for the month of October. Make your own plan and share it! You can join the Facebook group and RSVP to the Facebook event for moral support. The Google group is also a great resource for ideas about where to find local versions of your favorite foods. Check out this Source Guide for a list of establishments that are on-board the local train.

If, like me, you derive your self-worth some occasional pleasure from tweeting, use #EatLocalSB, @EdibleSB and @CECSB as you track your progress.
Posted by Unknown at 2:49 PM