When it comes to Thanksgiving, I have mixed childhood memories. I remember carefully making little place cards for every family member’s spot at the table, singing songs about the many things I was thankful for, and having terrifying nightmares for weeks about the electric saw my dad used to slice the turkey.

I was always under the impression that I was super helpful to my mom in the kitchen, but I now suspect that I invented those memories. That’s because I actually have no idea how to prepare any Thanksgiving dish. So if I was in the kitchen at all in years past, I must have been just standing there zoning out or something.

My utter lack of Thanksgiving-preparation knowledge started to worry me when it was decided that David and I would be in charge of pies and wine this year. Wine, no problem. Pies… problem.

Simply Pies uses only locally produced fruits and vegetables in their pies, and they purchase all their other ingredients (like eggs, milk, and flour) from local co-ops. Lucky for me, one of those local co-ops, the Isla Vista Food Co-op, sells Simply Pies vegan pie crusts. Starting out with a pre-made pie crust made the whole task considerably less daunting. 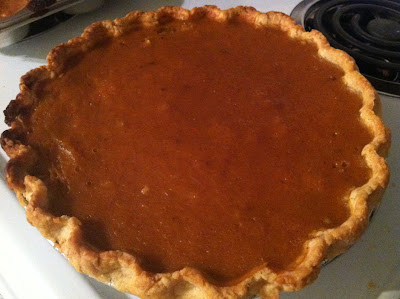 Anyone who knows me knows that I am terrified of butternut squash. The last time I tried to chop up a butternut squash, I ended up with squash and seeds all over the kitchen and Band-aids on at least two fingers.

So I did some research before attacking the squash this time, and it turns out that if you stick the squash in the oven at 350 degrees for about 40 minutes and then let it cool completely, the skin peels right off and it’s very easy to cut up:
After roasting in the oven, the squash was really squashy (!). I put it in a mixing bowl with the brown sugar and beat it together by hand. All the recipes I found online suggested using a power mixer but I don’t own one. So I came to terms with the idea of having slightly chunky pie and went medieval on that squash with a fork.

So what if the pie wouldn’t look pretty? It would just be like one of those unfortunate girls with beautiful bodies but unattractive faces, whom immature guys sometimes call "Butterfaces" ("She's got a great body, but her face..."). To those guys, I always say that it's better to be a butterface than a jerkface. And this pie was certainly not a jerkface.