On Tuesday, I skipped down my front walk to collect my Plow to Porch delivery box. Feeling a bit like a politically correct kid on ChristmaKwanzukkah, I peeled open the top of the cardboard… and was immediately hit in the face by a plume of fluffy, strongly scented greens.

Fennel! Yay…? I think I am not alone in my ambiguous feelings toward fennel. It’s hard not to be excited by something with such a distinctive flavor, but I’m not entirely sure I like that flavor. It’s the flavor of anise, also used in black licorice. I certainly don’t like black licorice, and I’ve only eaten anise as an antidote for bad gas for no reason at all.

Despite its questionable taste, fennel has texture going for it. Its texture is like celery. In fact, I’m going to go out on a crunchy, porous limb and say that fennel is like celery’s flamboyant cousin who causes general confusion at family dinners.

Just as much as a flamboyant cousin, every family dinner needs a terrifying albino neighbor. Lucky for me, my Plow to Porch box also included white beets. At first I wasn’t sure what these white beets even were, but then I received an email from Plow to Porch explaining that they hadn’t received their expected shipment of red beets, so they had delivered these creepy white beets instead.

I’m giving the white beets a hard time, but they are actually quite special. I found some websites that describe them as “novelty” beets – so, apparently, they’d be a perfect gift to bring to your next Yankee Swap – and they have the same nutritional value as regular beets but a milder flavor.

Since it is no longer October, I am no longer bound by my pledge to eat only locally produced foods. So for this recipe, I used apple cider vinegar that was pressed by Trader Joe’s somewhere far, far away and Dijon mustard, whose very name betrays its un-American origins.

To make up for the Dijon mustard’s anti-American background, I decided to add apples – everyone’s favorite American snack – to this recipe. In honor of the impending election, I give you Roasted American (because of the apples) Feet (because fennel + beet = feet). 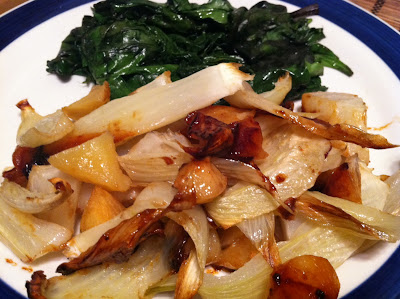 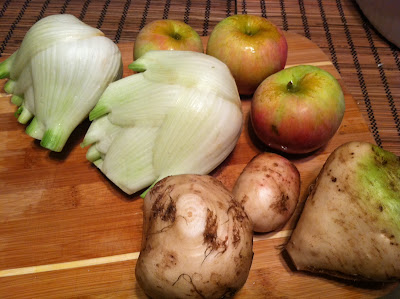 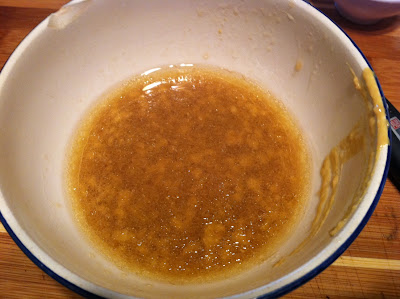 First, I preheated the oven to 400 degrees. Then I had to skin the apples and beets and chop them up into cubes. This was kind of an excruciating task, but I put on the latest episode of The Walking Dead to watch while I did it. This kept me entertained and reminded me that the pain in the butt of skinning and chopping up vegetables is better than the pain of having your butt eaten by zombies.

The fennel heads were easier to deal with: I just sliced them into thick strips. I arranged the apples, beets, and fennel in baking dishes pretty haphazardly: 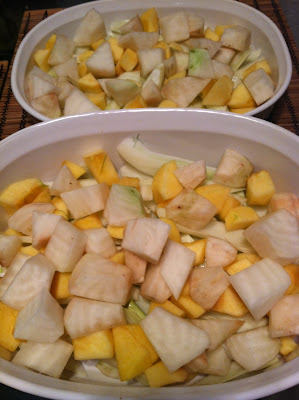 Then I mixed up the apple cider vinegar, olive oil, salt, honey, and mustard in a bowl and drizzled it on top. I put the baking dishes in the oven for 50 minutes, until the fennel was almost clear and the beets were tender.

While the dishes were in the oven, I grilled up the white beet greens, which were no more pallid than the greens of normal beets, in olive oil. Beet greens are full of vitamins K, A, and C and taste a lot like spinach when they’re grilled.

The finished product tasted yummy in a very autumnal way. The sweetness of apple balanced out the anise flavor of the “feet,” and the combination of textures worked well, too. It seems to me American zombies everywhere could learn a thing or two from this slightly sophisticated preparation of feet.
Posted by Unknown at 10:54 AM