Last week at the farmers market, I came across the stand of Nancy Bertelsen. She grows rhubarb, among other tasty things, in her 1.5-acre backyard, and sells it with a smile for $3 a bunch: 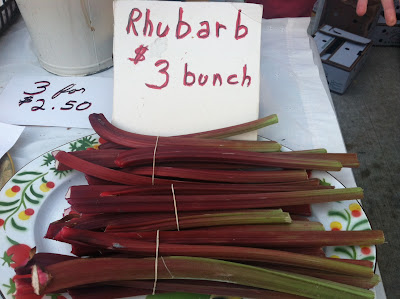 I have to admit that I was disappointed that Nancy's name was not Barbara, since I would have loved to nickname her Rhubarbara. Luckily, I live in Santa Barbara, so I can make that pun with any rhubarb recipe I come up with, anyway.

I could have snacked on the rhubarb raw, or added it to green juice for a sweet kick. But I decided to make my first encounter with rhubarb coincide with another first: my first attempt at jam making.

Before I went about trying to make jam, I picked up a pint of strawberries from Chuy at Chuy's Berries for only $2.50 - the best price at the market! I wasn't sure if I was going to like the taste of the rhubarb, and I figured that pretty much anything tastes great if you mix it with strawberries.

Now, the stock of special, fancy ingredients in my pantry is admittedly paltry. But there is one ingredient in most jams that you probably wouldn't find in even the most impressively stocked kitchen cabinet: pectin.

What is pectin, you ask? I don't know, but it doesn't matter. Because pectin, shmectin! This is a recipe for some pectin-less jam!

First, I chopped up the strawberries and rhubarb. You know that trick your elementary school art teacher taught you to do with white carnations, where you put food coloring in the water and the flowers drink it up and change color? Well, rhubarb looks like somebody did that with red food coloring and a stalk of celery:
Then I put the diced strawberries and rhubarb in a big sauce pot with the sugar, lemon juice, and orange juice.

I had squeezed the juice myself from organic lemons I'd purchased at Trader Joe's (they're not in season around here right now) and organic oranges from various farm stands at the market (I go kind of nuts with oranges each week). My little electric citrus juicer is no Omega 8006, but it gets the job done and I find the process quite therapeutic, honestly.

I covered the pot with all the ingredients in it and cooked them on medium-high heat for about 5 minutes, until the sugar dissolved. Then I turned the heat down to low and let the mixture simmer for 15-minute intervals, stirring it and checking its consistency in between.

In total, I ended up letting it simmer for about an hour. It was still more liquid than I would like jam to be, but I didn't want to risk burning the fruit, and also I was getting bored with the whole project.

So I poured it into two mason jars and put them in the freezer. The next day, I took one out to thaw - in about an hour, I had myself some tasty jam! 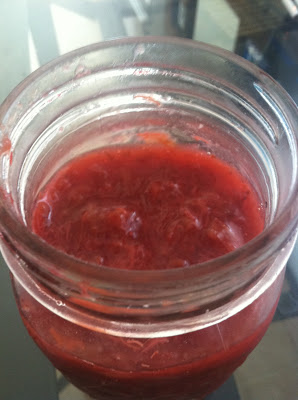 It tastes sweeter than a strawberry, with a distinct hint of orange. The texture of the rhubarb is not celery-like at all anymore, thank goodness. It is mushy enough to spread, and just as lumpy as you'd want jam to be. Yum!

Now that I know it can be so easy to make, I don't think I'll ever buy another container of jam. I have another big mason jar of it waiting in the freezer, to keep around until rhubarbs go out of season! And after that, I'll have to settle for making jams with less punny names. Like blueberry jam. Meh.