Too Dirty to Cleanse?

Pressed Juicery, an LA-based company with locations all around southern and northern California, just opened their newest counter, tucked away in the back of a strip mall on Coast Village Road in Montecito. The ingredients are local to southern California, but since their only kitchen is in LA, that’s where the juices are prepared each day before being driven up to the other locations.

Now, it’s no secret that I don’t buy into the idea of cleansing, unless it’s a peanut-butter-toast-and-cereal cleanse. That I feel confident I could pull off. But when I stopped by their newest location to check it out, I saw a chalk sandwich board out front announcing their Grand Opening Special: $39/day. 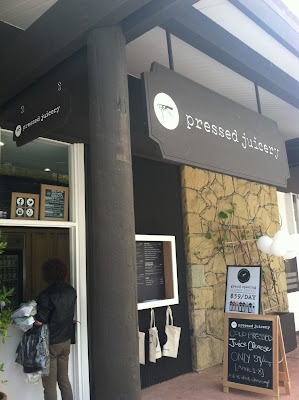 Holly and Jeremy, who were working the counter, were quite energetic, informative, and helpful. They offer three options for cleanses; I chose Option #1, for people who are new to cleansing, since it is apparently the easiest plan to stick to. Holly helped me plan my cleanse using an adorable little chart that laid out all my options.

They offer seven “green” juices, four “root” juices, four “citrus” juices, and three “almond” juices. I got my choice of six juices, which I was to drink in this order: green, root, green, citrus, root, almond. In addition, I got a bottle of Chloropyll H20 to drink throughout the day and a bottle of Aloe Vera H20 to drink before bed for digestion.

I won’t pretend I wasn’t a little pumped to get started on this cleanse. I like making plans, and the idea of having a neat little formula for my day’s consumption was appealing to my brain (if not my stomach). Plus, the juices were colorful and looked pretty all lined up:

Yesterday morning, I woke up slightly apprehensive but ready to begin my cleanse.


I drank this for “breakfast” over the course of an hour as I went through my normal morning routine. David had a protein shake for breakfast so I didn’t feel left out, and neither of us had coffee. The “Green 2,” as it’s called, was pretty sweet and tasty. Pressed Juicery uses the same trick I always pull to make my green juice palatable: toss an apple in there and hope for the best.


I drank my “Root 1” juice as a mid-morning snack, beginning in the car on the way to campus and continuing to sip it throughout lecture. Without my usual grains for breakfast, my body was starting to feel a bit strange. I was doing a lot of those inner burp things, which I have onomatopoetically dubbed “zongs.”


I guess this was lunch. I drank it on the drive home from campus and didn’t feel guilty about my lifestyle/disregard for safety the way I would have if I were eating a solid meal in the car.

The pineapple and orange in the “Green 5” made it noticeably sweeter than the green juice I had had for breakfast. After finishing it off, I felt tempted to eat some real food. It wasn’t that I was hungry; I just craved texture. To avoid the temptation of the kitchen, I went outside on the patio to write and took my time sipping lunch.

3:00pm: I remembered that I was supposed to be drinking the chlorophyll water throughout the day.


Chlorophyll is an antioxidant and keeps you energized. The juice tasted really lame and nothing-y, but I drank the whole thing quickly because my stomach was starting to feel empty. (Chlorophyll? More like Bore-ophyll!)


I started in on the “Citrus 2” as a snack immediately after finishing the weird chlorophyll water because I was still hungry. Like the green juice I had had for lunch, the citrus juice was dominated by the flavor of the pineapple.

I was beginning to feel bored with this cleanse. It was getting chilly out on the patio so I had to move inside to write at my kitchen table, and all the food options surrounding me were driving me a bit mad.


I decided to call my beautiful, sage friend Saloni to talk about life instead.

5:15pm: I still really wanted a bowl of cereal.


It was time to drink the second root juice, but it seemed really unappetizing to me. So I decided to walk to the gym and take a spinning class to kill a few hours and take my mind off not eating solid food.


I felt great! It surprised me that despite not having consumed anything besides fruit and vegetable juices throughout the day, I was able to have a satisfying workout. Plus, I chugged about a liter of water.


On the 30-minute walk home from the gym, I started to feel uncomfortable. My head was aching dully and I was slightly off-balance. I pulled out my phone and Googled “exercising on a juice cleanse.” Yup, this was research I should have done before letting Janesh, my petite-gay-hilarious-Indian spin instructor kick my butt (and calves and thighs).

I did some quick math (not in my head! I used the MyFitnessPal app) and realized that, given my speed walk to and from the gym and my 45-minute spin class, I had netted about 180 calories for the day.


By the time I reached my apartment, I had decided to break the cleanse and just go for that bowl of cereal. I didn’t even want to look at the second root juice I was supposed to have had for dinner – the thought of more vegetable juice made me feel slightly nauseated. As I nommed on my Cheerios, I perused Pinterest on my phone.

7:50pm: No way! According to Pinterest, you can substitute peanut butter for regular butter to bake a slightly healthier loaf of banana chocolate chip bread. 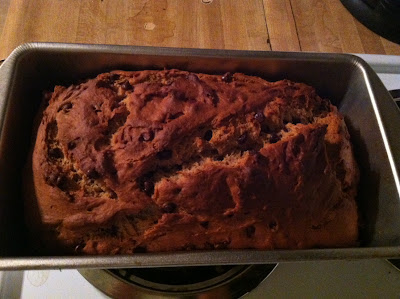 
The peanut butter banana chocolate chip bread was done! David and I each enjoyed a slice of it while watching Modern Family on Hulu. I realized that spin class had ended almost two hours before and I still hadn’t showered - thus, I came to the satisfyingly punny conclusion that I must just be too dirty to cleanse.

Okay, so that didn’t exactly go as planned. I ate a bowl of Cheerios and a slice of banana bread instead of drinking the last root juice, and I didn’t even get to the almond “juice” (almonds, dates, vanilla bean, filtered water, sea salt) or the Aloe Vera H20.

But I don’t count my cleanse experiment as a complete fail, because I learned some important things yesterday: