I Can't Believe It's Not Cheesecake (Mousse)

When I became a vegan, there were certain foods I knew I could easily veganize by using substitutes for eggs and milk. But there were some foods I assumed could never be properly veganized. Cheesecake was one of those foods.

For my eighteenth birthday, my parents threw me a surprise dinner at the Cheesecake Factory. All my best friends and my (then-unbeknownst-to-me) gay boyfriend came, and we gorged ourselves on all the horribly delicious appetizers and entrees we could stuff into our faces. We didn’t save any room for dessert, but we were at the Cheesecake Factory for Pete’s sake, so we felt obliged to order some cheesecake to go.

The next day, I had my wisdom teeth pulled. All four. Impacted. It was rough. And what made it rougher was that I had a piece of perfectly good, uneaten chocolate-chip-cookie-dough cheesecake from the Cheesecake Factory sitting in my refrigerator.

I could barely open my jaw wide enough to swap out the bloody squares of gauze wedged into the gaping holes where my wisdom teeth used to be; there was no way I was going to manage to eat that cheesecake. So instead, I watched my family members devour it, bite by bite, until every last morsel was gone.

I made a vow that day: nothing was ever going to keep me from eating cheesecake again. It wasn’t that serious of a vow, though, because it became pretty much null and void when I went vegan. Until now.

Last week, I was shopping at Trader Joe’s and stumbled upon this display: 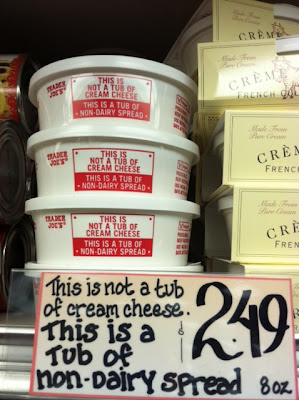 How perfectly delightful, I thought, that Trader Joe’s would name a product “This is not a tub of cream cheese. This is a tub of non-dairy spread.” I decided to purchase a tub of it to show my support for two-sentence-long grocery item names.

Part of me wanted to be boring and put it on a bagel or something. But a bigger part of me wanted to honor the vow I had made to myself on the day after my eighteenth birthday, and I decided to try to bring cheesecake back into my life.

Now, I’d had yummy vegan cheesecake on two occasions: at Café Muse in Hollywood and at Loving Hut in San Francisco’s Chinatown. But I’d never attempted to make my own cheesecake, vegan or otherwise, so I decided to set my sights low. I’d make cheesecake mousse. That way, I wouldn’t have to worry about baking it (and I wouldn’t have to go out and purchase any graham crackers for the crust). Here’s what I used: 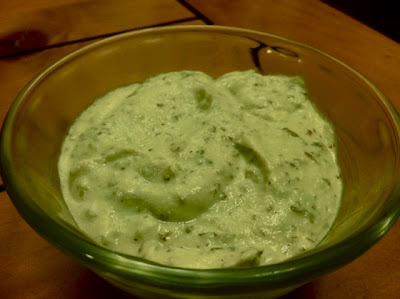 The only real instruction for this recipe is to combine the flax meal and water in a little dish first; after a few minutes, it will congeal into an egg substitute. Then I just dumped it into the food processor with the rest of the ingredients and pulsed it until it was smooth. I separated the mousse into four small dishes and refrigerated it for a couple of hours.

Success! It tasted sweet but not too sweet, and the consistency was actually pretty close to cheesecake. If you are feeling fancy, you can always add a strawberry or raspberry garnish. Next time, I’m going to serve it in shot glasses, layered with vegan chocolate mousse. Yum!
Posted by Unknown at 1:37 PM