A couple of months ago, I splurged and spent over $25 on a fancy bottle of walnut oil. I figured it was $25 toward my health, since one tablespoon of the stuff apparently has enough omega-3 fatty acids to sustain a family of four on a vegan desert island for a month (or something like that).

But since making this purchase, I have been anxious about using the walnut oil, so the bottle is still mostly full in my cabinet. This type of thing happens with every splurge I make. For example, last summer I spent 80 euro on a designer purse in Florence, Italy. Maybe that doesn’t seem like a lot of money to you, but at that point, the rest of my “purse” collection consisted of canvas shopping bags that had been given to me at organic food festivals and similar events.

Anyway, after spending so much money on this Florentine purse, I was afraid to use it for its intended function. I was plagued by fear that it would get stolen (the purse itself was far more valuable than anything inside it) or that my lip gloss would melt all over it or that some other misfortune would befall it.

The fancy walnut oil in my cabinet was becoming the food equivalent of my Florentine purse (which, by the way, is still in fantastic shape). I needed to use it for something. So a couple of nights ago, I decided to make walnut hummus with lemon juice. Here’s what I used: 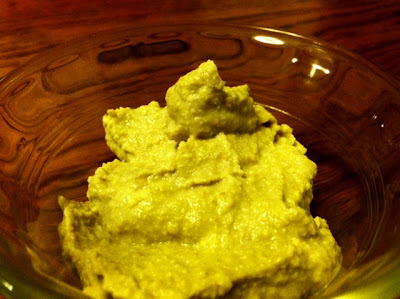 I had no idea what I was doing (I’m sure that is not incredibly surprising), but as it turns out, making hummus is about the easiest thing I’ve ever done. I just dumped everything in the food processer and pulsed it until it was the consistency of, well, hummus.

It turned out a bit tangy, which I liked, and nutty at the same time. I immediately decided to make hummus to bring to every party I’m invited to in the future. It’s so easy, and there’s something undeniably cool about the person who brought the homemade hummus. I want to be that person.

Unfortunately, this hummus was almost too good. David ate nearly the entire batch in one sitting (apparently when I said, “Would you like a bit of hummus to hold you over before dinner?” he heard, “I made this batch of hummus just for you, and I don’t want any of it myself”).

But since it’s so easy, I’ll just make another batch in the next few days. Now that I’ve moved past my anxiety over using my inordinately expensive walnut oil, there’s nothing stopping me.
Posted by Unknown at 5:08 PM