I am not a very competitive person, generally. As a fifth-grade softball player, I was relegated to right field, where I tugged up stray blades of grass and honed my (now perfected) zoning out skills. And I’ll likely fail as an opera singer, since my diva ways do not extend far beyond writing a self-indulgent blog and photo-documenting all my meals.

But at Mike and Patty’s, a neighborhood breakfast joint in Boston’s fabulous Bay Village, a long-dormant competitive streak was awakened within me. I was meeting my pregnant-but-somehow-still-skinny friend Bridget for breakfast there before I headed back to Santa Barbara, and I arrived five minutes before she did.

It was immediately apparent that seating would be an issue. Mike and Patty’s, though charming and cozy, is cramped, to say the least. The single table was occupied by two couples and a baby in a carrier and the two counter stools were occupied by another, nerdier couple. Both parties had just gotten their orders.

Since there was nowhere to sit, I considered the option of just standing there balancing the plate on one hand while eating off it with the other, like I used to do in my little cottage before I had a kitchen table. But the only place to stand was directly in front of the counter, silently staring down a woman I had to assume was Patty, who wanted to take my order. I tried that for a while, but it got awkward pretty quickly.

As I waited, another customer showed up, carrying a messenger bag. Now it was really crowded. There was just no room for me, the random guy, and his messenger bag. As the couples with the baby prepared to leave, I watched the guy eying their soon-to-be-available seats. I hoped he didn’t think he was going to get one of those seats. Suddenly competitive, I began to imagine the altercation that would ensue if he made a move, and I clenched my fists, preparing for the worst.

But at that point, Bridget arrived and I realized I had had nothing to worry about all along. Bridget is pregnant. In the hierarchy of seat claiming, Pregnant beats Random Guy with a Messenger Bag any day.

The reason we had come to Mike and Patty’s is because it is quite vegan-friendly. Although there are no flat-out vegan items on its menu, many things are easily veganizable. They have Daiya vegan cheese substitute and Tofutti cream cheese substitute. And both Patty (at whom I had been awkwardly staring while I stood waiting for Bridget to arrive) and Mike (who was quite visible in the tiny kitchen and able to participate in conversation) were exceptionally friendly and willing to make substitutions.

I went with the Vegetable Torta (sweet potatoes, poblano peppers, avocado, refritos, and jicama slaw on a roll) and substituted Tofutti for the goat cheese. Putting sweet potatoes in a sandwich is one of those things that had never occurred to me but once I tried it, it made so much sense: 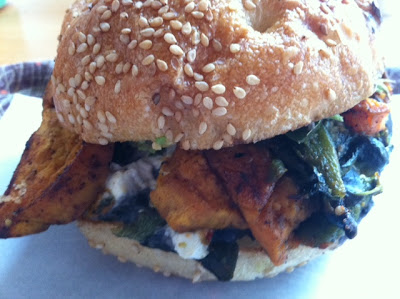 Thanks, Mike and Patty, for a perfect last meal in Boston. I understand why seating is so competitive – the food is worth it.
Posted by Unknown at 5:30 PM