And the Beet Goes In(to the Juicer): Beet-Carrot-Spinach Juice

When it comes to receiving Christmas gifts, I’m a little nontraditional. Diamonds might be a girl’s best friend, but who wants a best friend who’s prettier than you? Also, best friends can stab you in the back - and if they’re using a diamond, it’s going to hurt.

So David, who obviously knows me well, gifted me a juicer. It’s not just any juicer - it’s the Omega 8006 Nutrition Center Juicer. We named it Omar. Omar is easy to clean, which makes him far superior to the only other juicer any other juicer I’ve ever used.

Of course, I wanted to start “juicing” (that’s what the cool kids call it) immediately. I decided to switch our Plow to Porch delivery subscription to the “Juicing Box,” which includes more juicing-friendly produce and fewer random things like turnips and dragon fruit.

We received our delivery later that week, and it included an absurd amount of beets. I don’t have anything against beets, but I usually like to eat about one beet per sitting, maybe two if for some reason I have two beets on a plate in front of me. In this “Juicing Box,” we received three bunches of beets, with four beets to a bunch. Math is not my strong suit, but that is too many beets.

At this point, we had no choice but to start juicing every day, so none of the produce would go to waste. It became sort of a bonding ritual between me, David, and Omar. David would come home from the office to find me diligently scrapbooking writing my dissertation, and we would head to the kitchen to find Omar and make some juice. We came up with a bunch of different juice “recipes,” all of which included beets, of course.

I felt like Lil’ Wayne with all the beets I was dropping… into the juicer. One of my favorite recipes only involves three vegetables: carrots, beets (duh), and spinach. Here’s what I used: 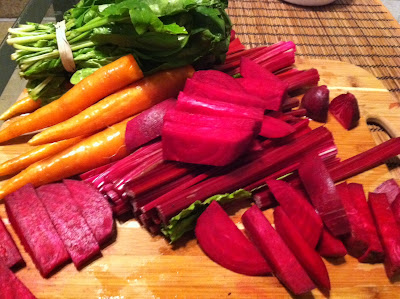 I started with the spinach, because Omar’s instruction booklet said he prefers it if you start with the softer objects (like spinach) and work up to the harder objects (like carrots). That seemed reasonable. But after most of the spinach had been juiced, here’s what I had: 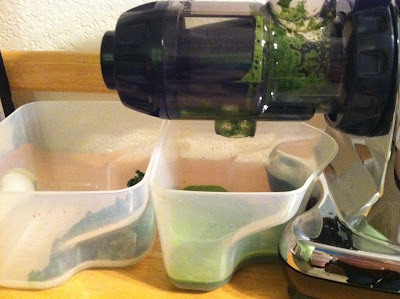 A disappointing yield, I’m sure you’ll agree. But not to worry: greens always produce a paltry amount of juice, and that’s just as well, because spinach juice tastes all weird and bitter. That’s what the carrots and beets are for: to make you forget you’re consuming an entire bunch of spinach in two sips. After juicing all the carrots and beets as well, I had a container full of juice (on the right, closer to Omar) and a container of pulp (on the left): 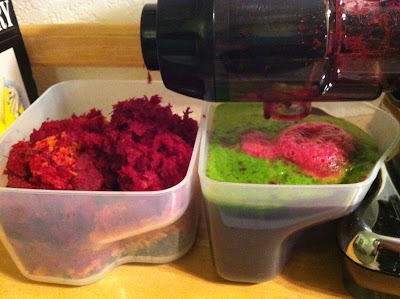 It was enough to fill two mason jars: one for each of us. I was struck by how much the carrot-beet-spinach juice resembled blood, and I suspect David had the same thought, because his face looked a little funny as he raised his mason jar to clink with mine.
After taking a sip, David and I smiled at each other from across the kitchen table and immediately turned away in disgust: our teeth were coated with a sheen of the blood-red juice. A superstitious person might assume we were vampires who had, just this second, committed murder.

On the bright side, it tastes delicious. The bitter taste of the spinach is completely overwhelmed by the sweet beets and carrots (whose juice is as sweet as a fruit’s, surprisingly). The moral of the story is: drink this juice, but not before a hot date! Unless your date is into the whole vampire fad.
Posted by Unknown at 5:32 PM