When Life Gives You Anything at All, Make Juice

Until recently, I thought the verb “to juice” only came up in conversations between body builders and professional athletes in reference to the steroids they don’t take.

But apparently, it also comes up in conversations between hippies and health nuts (and me). “Juicing” means stuffing whatever fruits and veggies you can get your hands on into a juicer and then drinking what comes out the other end.

My married friends Sloane and Jason juice like it’s their job (and they don’t work at Jamba Juice, so no, it’s not actually their job). They buy huge tubs of spinach at Costco and blend it with other vegetables and fruits, then walk around sipping from thermoses of green juice all day. They’re doing it to lose weight, and it’s working – they look good.

Sorry, but if I wanted to go on a liquid diet it would involve chardonnay, not liquefied chard.

I’m not about to stop eating solid foods, but my roommate has a juicer so I decided to try juicing the vegetables I had purchased at last week’s farmers market just to see what happened. Here’s what I used:

As I added the ingredients, I felt like a contestant on the groundbreaking early-90s Nickelodeon game show Family Double Dare. The contestants on that show were always doing absurd tasks like slingshotting water balloons at human targets to try to fill a container up to the line before the other secretly dysfunctional nauseatingly happy family could complete the same challenge.

Luckily, I wasn't competing against anyone else. And I wasn't using a slingshot to get the ingredients into the juicer. But my progress was quite slow-going:

Finally, after adding the apples and cucumbers (which, unsurprisingly, yielded a lot more juice than the leafy greens), I had filled a large mason jar. The juice tasted delicious. The cucumber and apple flavors dominated the bitterness of the kale, as I had hoped.

But I didn't know what to do with what was left of the ingredients - the parts that weren't turned into juice. They had collected in a big, gunky mess that smelled delightfully fresh but had the consistency of muck at the bottom of a lake: 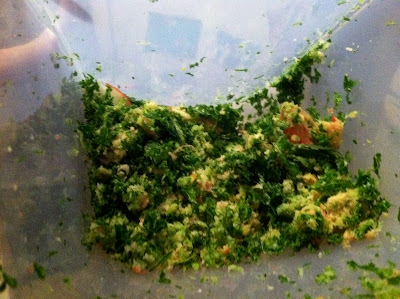 I poked around online, but nobody had any enlightening ideas about what to do with this juicer "junk." Most people composted it or fed it to their rabbits. I decided to just eat it with a spoon.

Then came the dreaded task of cleaning the juicer. It came apart into like, eight pieces. Each of those pieces was coated in damp, shredded vegetables that needed to be disposed of before they started to stink.

The deconstruction and cleaning process is so complicated, there are instruction videos on youtube. I know because I consulted one of those videos after wrestling with the stubborn thing for about twenty minutes. I ended up winning - having just juiced, I had extra-human strength, obviously.
Posted by Unknown at 12:32 PM