Dear Stove: Burn Me Once, Shame on You

I’m in the process of getting settled in my new place, so things have been pretty hectic. I haven’t written a post in nearly a week for a couple of reasons. First, “blog about what I eat” ranks below “buy a bed” and “unpack my clothes only to discover there is not enough room for them in my tiny new closet” on my list of things to do. Second, I haven’t been eating anything all that exciting. I’m talking peanut butter toast and Clif bars, maybe a few carrots.

In fact, yesterday I did something I have never done before: I forgot to eat. I hear people talk about this happening and I think about how silly they sound while I nom down my third snack of the day.

But yesterday I was preoccupied with setting up my internet connection, picking up pieces of furniture I found on Craigslist, and unpacking various bags and boxes. I even purchased a full-sized mattress and clumsily pushed it on a dolly the whole half-mile back to my cottage so I wouldn’t have to pay for delivery. People in cars yelled encouragement out the window at me.

It got to be 9pm and I realized I hadn’t eaten since the bowl of Cheerios I’d scarfed down at 9am while standing in the middle of my kitchen (I don’t have a table yet). But strangely, I wasn’t hungry. I figured I’d prepare something that would take a while to cook so that maybe by the time it was done, I’d be hungry enough to eat it.

I got excited because it was the first time I’d be using my new stove! It looks much fancier than the stove at my old apartment, and it is gas rather than electric. I’d never cooked on a gas stove before. Keep that in mind.

I put some jasmine rice on to simmer (jasmine rice usually takes a while to cook) and began chopping up some veggies: onions, zucchini, and spinach. I also put some tofu on another burner to brown in olive oil. When the veggies were almost done, I added the tofu into the wok with them along with some Dijon mustard and soy sauce (a combination my sister had discovered while she was visiting).

After about forty minutes, the jasmine rice was still not done and I was getting impatient. It occurred to me that I had probably just used too much water (I hadn’t yet unpacked the measuring cups), and a quick taste of the rice confirmed that it was, in fact, done. I just had to drain the remaining water somehow.

Since the rice would probably fall through the holes in my strainer, I decided to pick up the pot and use the cover to hold the rice inside while the water poured out. But I hadn’t unpacked my oven mitts yet, so there was nothing with which to pick up the pot.

There was no time to dig around in the boxes to find the mitts – if the rest of the meal got cold, heating it up would be a huge pain since I didn’t yet have a microwave.

My eye fell on a knit placemat that was lying on the counter. I grabbed it and wrapped it around my hands so I could grasp the pot. I reached for the pot and WHOOSH! The placemat was on fire.

I didn’t react as quickly as I should have because I was so confused. I almost threw the placemat back onto the stove, which, being a gas stove, had a little flame under the burner. Obviously.

Luckily, I noticed the explanation for the flaming placemat in my hands before throwing the whole unfortunate makeshift oven mitt back into the fire.

I threw it in the sink instead and whacked at it with a spatula until the non-fiery end of the placemat had smothered the part that was on fire.

The whole kitchen smelled like burnt placemat, but the meal still tasted good. I ate it while standing in the middle of my kitchen, looking piteously at the destroyed knit placemat. 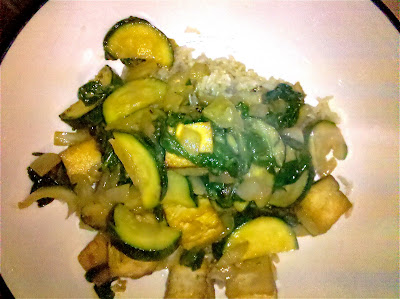 When I was done eating, the first thing I did was write a note to myself on a Post-it:

TURN OFF BURNER BEFORE REMOVING POTS. YOU WILL CATCH ON FIRE.

I stuck it to the stove. Burn me once, shame on you, Stove. Burn me twice, and I’m out of placemats.
Posted by Unknown at 3:42 PM