Camping is one of those activities during which it's not awkward or socially alienating to be vegan. Most people who like camping also like the environment, so there is probably a higher percentage of vegans among that population. And Clif bars, oatmeal, fruit, trail mix (the kind without M&Ms)... all vegan. So when my sister suggested a spontaneous camping trip to Sequoia National Park, it wasn't the cuisine I was worried about.

It was the bears! I had to assume that bears don't discriminate between vegans and omnivores when it comes to a snack. So I could only hope that any bears I ran into would themselves be vegan.

Sequoia National Park is about a four-hour drive from Santa Barbara, and that's if you don't stop at every fruit stand you see on the side of the road. After losing considerable time but gaining an assortment of fruits (including a gigantic box of oranges for only $3.50), we arrived at the Foothills Ranger Station.

Tim the Ranger told us that all the nearest campsites were full, but that we'd probably have luck if we headed up the "pretty wicked" road to Mineral King. We took his advice, but soon discovered that "pretty wicked" was an understatement. The Witch of the West is pretty wicked. This road was straight-up evil.

It wrapped up the mountain to an altitude of 6540 feet, and most of it was one-lane wide. Of course there was no guardrail and sections of it were unpaved. Every now and then, another car coming down in the opposite direction would appear suddenly from around a bend, causing me to simultaneously slam on the brakes, shout expletives, and have a minor heart attack.

When we finally arrived at Atwell Mill camping area, we had aged about thirty years and we were hungry. While Katie ran about collecting firewood, I chopped up the vegetables we had brought for dinner: green bell peppers, white onions, and sweet potatoes. We had also brought two apple sage Field Roast vegan sausages as part of the ongoing effort to clean out my fridge before I move.

I drizzled olive oil and sprinkled salt over the veggies and sausage, then wrapped them up in aluminum foil packages. Our fire pit had a grate, so we could just lay the packets on top of that.

After putting the packets of food on the fire, we discovered two obstacles to our meal. First, we had no way of knowing how quickly the food would cook. We would just have to guess. Second, we had nothing with which to remove the food packets from the fire. Neither of us had thought to bring a spatula-like tool, and our first idea - reaching into the fire with our hands wrapped in a sweatshirt - proved likely to result in charred sweatshirt-flavored food. We would just have to use sticks. 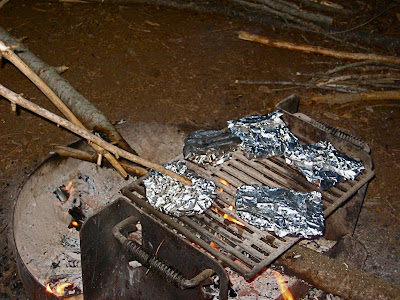 The onions cooked incredibly quickly, so we ended up eating them a bit burnt. The sausage situation was even worse. There were only a few good bites. But the sweet potatoes were perfect! 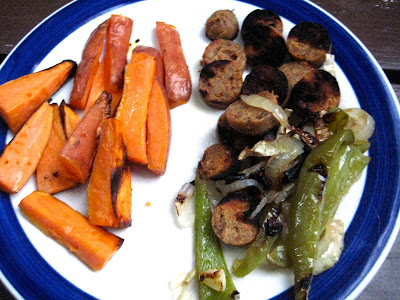 We learned from our mistakes, and the second night we put the sweet potatoes on the fire first, then added the onion packets later. We even got fancy and made spaghetti to go with the veggies.

I'm usually pretty dismal at following directions when it comes to food (I always forget to read "shake well"), but Katie and I successfully followed the directions posted at our campsite: store all food in bear-safe lockers.

By following those directions, we were able to sleep soundly, enjoy a beautiful 7.5-mile hike to (the, unfortunately, aptly named) Mosquito Lake, and play an unending game of Rummy 500 by the fire without getting mauled by a non-vegan bear.
Posted by Unknown at 7:08 PM