If This Is Raw, Then I Don't Want to Be Right

My sister Katie and I had a plan. She would come visit me and we would eat only raw food. We didn’t have a real reason to do this little experiment other than that we like to think we're pretty hardcore.

At a hypothetical dinner party where the guests are conscious eaters trying to out-brag each other, the raw foodist always wins. “I’m a vegetarian!” “Well I’m gluten-free.” “Oh yeah? I don’t eat anything that’s been heated over 104 degrees.” It’s the trump card of restrictive diets.

I understand that cooking certain foods (like vegetables) causes them to lose enzymes that you want to eat. So it makes sense to choose to eat raw food whenever it’s convenient. But to make it a diet and refuse to eat anything that is not raw seems unnecessary.

No matter. We wanted to try. So when she arrived at LAX airport today, we began to plan our raw day. We would eat lunch at Euphoria Loves RAWvolution on Main Street in Santa Monica (or Dance Dance RAWvolution, as Chris calls it).

Katie had brought along a cookbook called Raw Food: A Complete Guide for Every Meal of the Day by Erica Palmcrantz and Irmela Lilja. So for dinner, we would pick up some ingredients and cook ourselves a raw dinner at Andy’s house for ourselves, Andy, and his roommate, Chris.

Lunch at Euphoria Loves RAWvolution was good. The restaurant has a pleasant, hippie-chic atmosphere, with photos of people doing yoga poses on the walls and raw food interest books to browse while you eat.

After consulting with the women behind the counter, I decided to get the Original Big Matt Burger, named after chef Matt Amsden. It was a burger made out of what looked like seeds to me, with tomato, lettuce, home-made ketchup, and mustard on the side. I got it with avocado and wrapped in cabbage instead of on an onion roll: 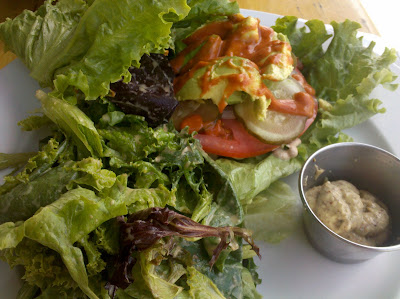 My sister ordered the zucchini spaghetti with seed pesto sauce. It tasted like regular pasta but a bit less slimy and it came with a raw cracker of some kind: 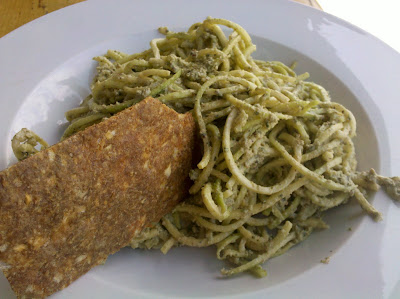 The problem with Euphoria is that the meals are pretty expensive. Each of us spent about $14 and we didn't even get drinks or desserts. After looking into the ingredients used in many raw recipes, we discovered the expensive thing is pretty much a rule.

And… that’s a problem. Neither of us has enough money to buy new, expensive ingredients for every meal while Katie is out here, nor can we afford to spend $14 every meal to eat out.

So we decided to amend our raw commitment. For dinner, we’re going to cook some pasta, make some salad, and try to make a raw vegan apple pie that we found in the Raw Food cookbook.

For the next two weeks, we will try new fun raw recipes and eat at raw restaurants we find… but not all the time. It’s the way I feel about a raw food diet in general. Since it doesn’t make a difference ecologically whether I cook my food or not, I’m not going to stress out about it.

I feel healthy as a plain old vegan and besides, I’ve never been too concerned about being that girl who wins "most hardcore" during restrictive diet battles at dinner parties. Nobody likes that girl.
Posted by Unknown at 6:12 PM