I like quinoa for a few reasons. First, it’s one of the few fancy-looking food words that I actually know how to pronounce: KEEN-wah. People can make fun of me all day for mispronouncing “pho,” but I’ve got quinoa, no problem. Second, it has a really fun texture. Like rice, but fluffy. And third, it’s really good for you.

In case you’ve been living under a rock lobster and you’ve never heard of quinoa, it’s a grain-like chenopod, like spinach, beets, and chard, and it originates in South America. The flowers on the plant are purplish pink and quite pretty in a garden. You eat the seeds, which are little, hard, and round, by cooking them like you would rice.

Quinoa’s gotten a lot of press recently as a “superfood,” since it’s one of the few plants that qualify as a complete protein source. It’s high in fiber, iron, magnesium, phosphorus, and amino acids, is gluten-free, and easy to digest. Basically, it’s the Chuck Norris of foods, if Chuck Norris were a hippie and not a Republican.

Once my sister and I decided not to be strictly raw during her visit, we went out and bought some quinoa. I should point out that it is possible to eat quinoa raw: you just have to soak it for two days first.

But we wanted to eat quinoa tonight, not two days from now, so we cooked it. I tried my hand at caramelizing onions to put on top, but I’ve never caramelized anything before, and this attempt was a little rough. They tasted fine, but I think to be completely caramelized they would have had to cook for a little bit longer (I stirred them in olive oil and a teaspoon of sugar for fifteen minutes).

Here’s the recipe we used for our quinoa meal. It came to about four servings, but we ate two servings each because we just love quinoa so much:

While the quinoa cooked, I (kind of) caramelized the onions and Katie stir-fried the vegetables in olive oil. When we piled everything together, it looked like this: 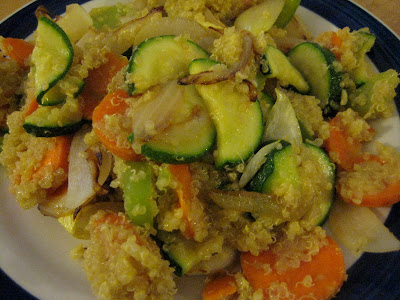 It looks a little hairy in the picture, but that's just its fluffiness. A quinoa dish like this is so delicious and easy. Quinoa is unbeatable – again, it’s a lot like Chuck Norris. But unlike Chuck Norris, you can eat quinoa without getting round-house kicked in the face.
Posted by Unknown at 9:03 PM