Sandwiches are one of those things that can either be mindblowingly good or incredibly bad. We all know what it’s like to bite into a surprisingly delicious sandwich – the kind that makes you a horrible lunch buddy because all you want to do is talk about how amazing every bite is. On the other end of the spectrum, a poorly made sandwich is not just disappointing – it’s devastating. A bad sandwich can really ruin your entire outlook on life day.

Unfortunately, I haven’t eaten too many sandwiches since becoming a vegan. At first I thought it was because most sandwiches include meat and cheese (except for peanut butter and jelly sandwiches, on which I could subsist for weeks if I needed to). But I recently realized another non-vegan ingredient that has thus far prevented me from enjoying sandwiches as regularly as I would like to: mayonnaise.

I’ve never been a huge fan of mayonnaise on its own (who is?), but it’s hard to deny that it really makes a sandwich hang together. Vegan-friendly sandwich shops often substitute hummus, but it’s just not the same. There exist a few vegan mayonnaise options – vegenaise from Follow Your Heart is my favorite, and they just came out with a few flavored varieties.

But vegenaise is only sold at Whole Foods. The problem with Whole Foods is that… I love everything at Whole Foods. Sometimes I manage to pay my eighty bucks for six things and get the heck out, but usually I do more damage to my grad student budget than that. So I needed a way to have vegan mayonnaise that didn’t involve setting foot in a Whole Foods.

With perfect timing, my former classmate Jesse sent me a link to Kenji’s slideshow of vegan recipes from his month-long vegan adventure (see his story at seriouseats.com). All the recipes look mouth-watering, and I have added a bunch to my To-Try-To-Prepare List (excluding the ones with “spicy” in the title).

Included in the slideshow is Kenji’s recipe for – you guessed it – or did you? – let’s assume you guessed it – vegan mayonnaise. I followed his directions, but I decided to add Ener-G Egg Replacer because I thought it might act as an emulsifier. Also because I have a huge box of Ener-G Egg Replacer and I don’t know how I’m ever going to use it all up.

What, you might be thinking, is an emulsifier? Apparently, it’s an ingredient that just makes the rest of the ingredients hang together. Much like mayonnaise itself, when used in a sandwich.

Here’s what I used: 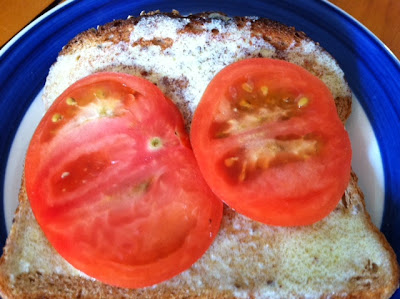 I dumped all the ingredients except for the olive oil and salt into my food processor and blended them together until they looked like this: 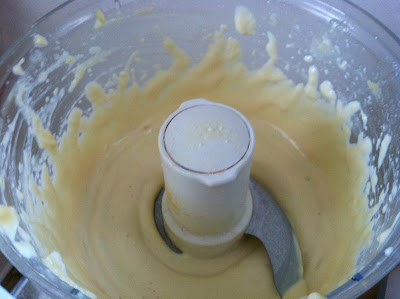 Now comes the risky part. I had to drizzle in the olive oil while the food processor was running. I've had bad luck with similar situations in the past, and I couldn’t help thinking of that old saying that goes something like: Explode all over the kitchen once, Food Processor, shame on you. Explode all over the kitchen twice, Food Processor... well, I was committed to making this mayonnaise, so I went for it.

And the mayonnaise didn’t explode! It stayed right in the food processor where it belonged while I poured in the olive oil, a quarter cup at a time. Here's what it came out looking like: 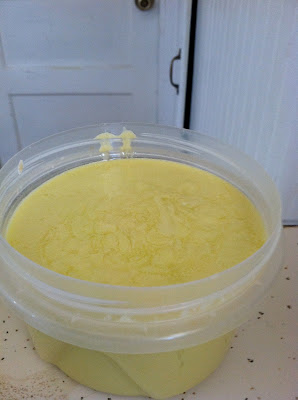 I enjoyed it on whole grain toast with slices of organic beefsteak tomato on top. It tastes good; almost exactly what I remember regular mayonnaise tasting like. The only problem is that it is really oily and hard to spread. I had to kind of pour it onto the toast.

But I plan to use it in every sandwich I make now! Except for peanut butter and jelly. Gross.