Last Saturday, David and I went camping at Jalama Beach near the random little town of Lompoc. It was the second time I’d been camping as a vegan; the first time was with my sister Katie last summer, and it involved a long, precarious, uphill drive and a plan to avoid getting eaten by bears. (Bears are not vegan.)

I discovered to my delight that there are no bears at Jalama Beach. There is a lot of wind at night, which is arguably about as dangerous as bears, especially when your tent has no stakes holding it down. Ahem.

There is also a little store right near the campsite that doubles as a restaurant. David, whose appetite would eat my appetite for breakfast, bought a hamburger to eat as an appetizer to the vegan dinner I had brought. I was slightly annoyed at his lack of faith in my vegan dinner, but I didn’t complain because I wanted to eat his French fries.

After a rousing game of Rummy 500, we got to work on dinner. I had not planned the specifics of the meal; rather, I had just thrown ingredients that seemed like they might go well together into a tote bag. I had already-cooked, tri-color quinoa leftover from the night before, a few fresh tomatoes and a Hass avocado from the farmer’s market, a can of organic black beans from Trader Joe’s, and Daiya vegan cheddar cheese: 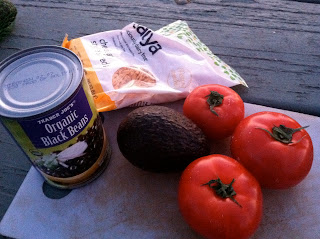 The only meal option I could envision was to toss them all in a pot together. Obviously, we started with the canned beans, which were already cooked. Our campsite had a little fire pit, so it was easy enough to heat up the beans in a pot. Then we stirred in about a cup of Daiya cheddar cheese, which melted immediately, and the tomatoes, which we had chopped into small chunks.

Finally, we poured the bean mixture over the quinoa and arranged the avocado slices on top. It looked… well, it looked like something I had thrown together at a campsite: 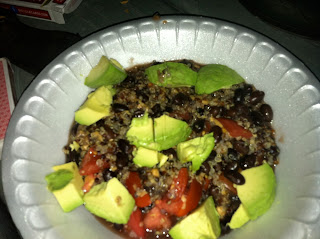 I decided to call this concoction “Fancy Beans,” since it was obviously a fancier version of the boring omnivore camping staple of beans and… hot dogs? Pork? What do omnivores put in beans when they camp? Something less fancy than tri-colored quinoa, I’m sure.

I decided not to share the name “Fancy Beans” with David, who is much too cool for silly food names. You know what else I decided not to share with David? My misery at being kept awake by stomach cramping and gas while he snored peacefully in his sleeping bag beside me. There I was, awkwardly alternating between child’s pose and happy baby pose (difficult to do inside a sleeping bag), cursing myself for believing I could eat half a can of beans with no consequences. What hubris!

My insomnia wasn’t helped by the gusts of wind that threatened to blow our tent over every few minutes or by the rowdy, pot-smoking thirty-somethings having a reunion at the neighboring campsite. I must have fallen asleep at some point, because I dreamed I saw the sunrise over the ocean. I only realized it was a dream when David reminded me that the sun does not rise over the ocean on the west coast.

In conclusion, I have to ask: why do people eat beans when they camp? The world may never know. But here’s what I do know: the next time I feel compelled to go camping, I’m bringing some coconut oil and anise seeds and I’m making myself a Libido Burrito. Lesson learned.
Posted by Unknown at 7:26 PM