I Kid! Some Vegan Snacks to Make You Feel Young

This week, I participated in my very last seminar meeting as a graduate student – the last class of my life. Of course, I will still be a student for infinity the next couple of years as I write my dissertation. But as far as coursework goes, I’m done!

In recent years, I have become more and more anxious about aging. (The other evening, I purchased a bottle of pinot noir without getting carded and I almost cried.) So I decided that if I couldn’t regress physically back to childhood (obviously, I couldn’t), I could at least regress gastronomically.

I got to work preparing three of my favorite childhood snacks, one of which had to be veganized. The recipes, if they can be called that, are delightfully simple. Just like childhood! 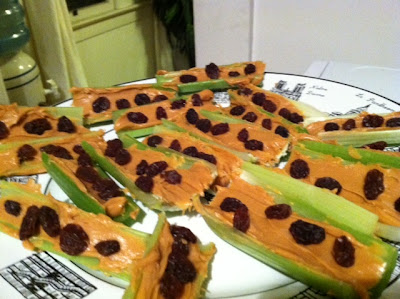 Chop celery sticks into 3-inch pieces. Spread a generous amount of peanut butter on each one, and top with raisin “ants.” 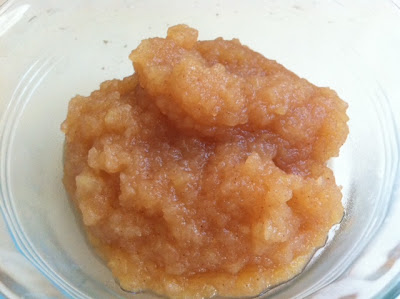 Skin, core, and chop up four apples. Put them in a sauce pan with ¾ cup water, ¼ cup organic sugar, and ½ tsp ground cinnamon. Cook over medium heat, covered, for 15-20 minutes. Transfer the apples to a food processor and pulse until the applesauce is the texture you want. 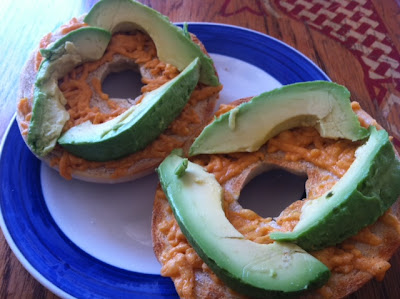 Cut a bagel in half. I use Bagel Josef’s plain bagels from Trader Joe’s, which happen to be vegan. Sprinkle Daiya vegan cheddar cheese and layer sliced avocadoes (or tomatoes, or whatever creative pizza toppings you have lying around) on top. Broil in the oven for about three minutes, or until the cheese melts.
Posted by Unknown at 3:57 PM