Yes, I WOULD Like Fries with That, Thank You Very Much.

After writing a pretty negative piece about McDonald’s, I had burgers on my mind. Lots of people think McDonald’s burgers (and burgers from similar establishments) taste delicious, so they choose to eat them, even knowing how awful they are. There has to be an equally delicious alternative that won't kill you.

Obviously, I’ve chosen not to eat hamburgers, or turkey burgers, or most veggie burgers for that matter (they’re often made with eggs). But I can’t deny that the experience of eating a burger is downright fun.

First, you get all excited as you see it coming toward you on a tray (probably with fries of some sort). Sometimes the burger is not assembled when you get it – it’s open-faced so you can admire all the extra ingredients. In that case, the inevitable “How am I ever going to fit that in my mouth?” question is delayed until you put the thing together.

Once you have it in your hot little hands, you have to unhinge your jaw in order to bite into it. It sounds uncomfortable, but it’s awesome. The burger, or parts of it, falls out the other end in the messiest way possible. By the time you’ve taken a few huge bites, your hands and face are covered in condiments and burger parts and you're feeling pretty satisfied with yourself.

I was determined to experience burger-eating again. I have some experience with vegan burgers, but I wanted to find a yummy burger nearby. So I did some research. LA Weekly identified the BBQ Tempeh Burger at Seed as the best vegan macrobiotic burger in LA. Lucky for me, Andrew lives right down the street from Seed.

Yesterday morning, we went to the beach so Andrew could surf and I could do my yoga practice. Sidenote: practicing yoga on the beach is a balance between awesome and awkward. The rush of getting a meditative workout by the majesty of the ocean can be nearly outweighed by the embarrassment of maintaining downward-facing dog while a group of hipster teenagers swaggers by snickering at your up-turned bottom.

After about an hour of trying to be zen in public, I was even more starving than usual. While Andrew went to change out of his wetsuit, I headed to Seed to pick up some take-out. My plan was to try the BBQ Tempeh Burger, but the Blackened Tempeh Burger with Mango Salsa (with lettuce, onion, sauerkraut, and mustard-veganaise spread) sounded too good to pass up. I got it on a ciabatta roll with a side of sweet potato fries, to make it as authentic a burger experience as possible. 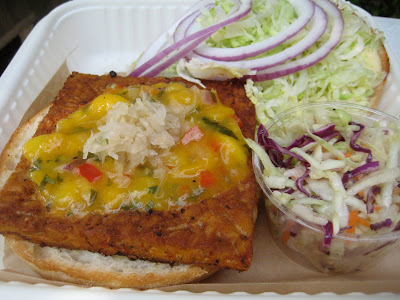 While I was waiting for my burger, I looked around the store (whose decor pulls off a compelling combination of trendy-minimalism and cozy-shabbiness). On one of the bookcases, I discovered two vegan macrobiotic cookbooks entitled “Love, Eric” and “Love, Eric and Sanae.”

I just love love, so I was intrigued. The cookbooks tell the story of how Seed chef Eric Lechausseur and his wife, Sanae Suzuki, came to discover vegan macrobiotic cuisine. Sanae was diagnosed with ovarian cancer in 1993 and, without health insurance in the United States, had to return to Japan immediately for a life-saving operation. During her long recovery, she and her husband began to explore food that “heals.”

With regard to food, macrobiotics is the idea that what you put in your body affects not only your physical health, but your mental and spiritual wellness. Apparently, good and bad energy can be conveyed through food. So a macrobiotic diet aims to deliver good energy through whole grains, organic vegetables, beans, and sea vegetables, grown locally and prepared simply.

I was totally satisfied by my burger. The odd combination of flavors (the most prominent being mango+mustard) was strangely perfect. It even kind of fell apart in my hands, so by the end I was delightfully messy. The sweet potato fries were delicious (even Andrew liked them, and he has a thing against sweet potato fries).

I tried to gage my energies after eating it. I couldn’t identify any good energy, per se, but I don’t really have any idea how one goes about identifying energy in the first place, so maybe I just missed it. And the only bad energy I felt came from Andrew, who wanted me to stop taking pictures of my tempeh burger already and come watch Game of Thrones with him.
Posted by Unknown at 10:04 AM