Even though Adama is one of the only 100% vegan restaurants in Santa Barbara, I don’t find myself eating there often. It’s probably because I (sadly) have no vegan friends... I have friends, okay?! Just not vegan friends.

But last night I convinced Dave, a particularly attractive – and definitely not vegan – computer nerd, to take me there for dinner. When I previously wrote about Adama, they were not yet serving dinner, so I was excited to check out it out.

From the dark wood floors and crown molding to the confusingly designed pink chairs and random decorative stove, Adama feels strangely formal. But the building clearly used to be a house, and there is something distinctly homey about the friendly staff.

The group of people sitting next to us included a particularly curious baby named Lucas who, when he wasn’t smearing fake butter all over his hands and face, was escaping from his entourage of adults and toddling around. The Adama staff welcomed Lucas the Baby with open arms, alternately chasing him down and talking to him in silly voices. I was entertained, but if you take formal dining very seriously (or if you hate babies) you might not dig the atmosphere.

Now, I’m participating in the Eating Rules October Unprocessed challenge, so I’m avoiding processed food for the month. But as a vegan I had to build in two caveats: I’ll eat processed food if other people make it for me (because if they’ve gone to the trouble to make a special vegan dish, I’m not going to be a total jerk and reject it) or if I’m eating out at a restaurant (because at regular-people restaurants there are usually only like, two things on the menu I can order anyway).

But I hadn’t thought about the possibility of eating at a 100% vegan restaurant. Would I stick to my unprocessed guns? I took one look at the Adama menu and realized that no, I would not.

Adama brands itself as "vegan comfort cuisine," and it’s obvious why. From the shepherd’s pie to the pizza to the barbeque sandwich, there’s something on the menu to make everyone comfortable. Everyone except maybe for Dave, who was looking decidedly uncomfortable in his confusingly designed pink chair.

Most of the main courses are made of Gardein™ or seitan – processed fake meat. I didn’t want to order a boring unprocessed salad at the one restaurant where I could eat whatever I wanted. And I figured that since Dave was eating at a vegan restaurant for my sake, this meal fell under the first caveat: food from other people.

So I ordered the “KFC” with mashed potatoes and gravy because I figured it was the closest I’d get to eating actual KFC. I would never eat actual KFC. And not just because it’s chicken. Luckily, the Adama version was way healthier than the "real" thing: 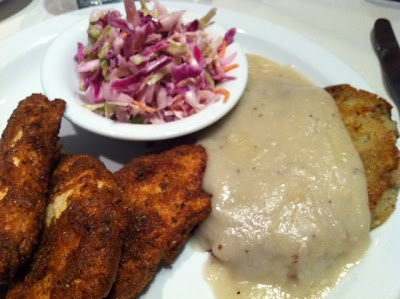 Unfortunately, the mashed potatoes and gravy were kind of weird. The potatoes were the texture of hash browns and the gravy didn’t really have much flavor. But the chicken was delicious; it was fried, after all. Dave tried a bite and said it tasted better than actual chicken! He went with the spaghetti and "meatballs" with zucchini: 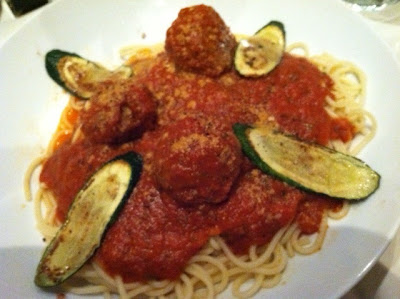 Neither of us had room for dessert, but I had heard so many good things about Adama’s dessert creations that I decided to go for it and ordered the apple pie with vanilla ice cream (made of rice milk): 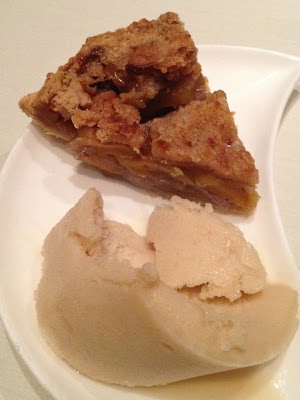 I wasn’t disappointed. The rice milk ice cream was much lighter than regular dairy ice cream, and I loved it. Adama was the perfect place to break my unprocessed pledge; I can’t wait to try more of the
"comfort cuisine" on the dinner menu next month, when I’ll have nothing to feel guilty about.
Posted by Unknown at 2:39 PM