So a Vegan Walks into an Unprocessed Bar...

So a vegan walks into an unprocessed bar... and asks, "Why isn't there a hash tag in front of the word 'unprocessed'? How is anyone supposed to search for this on Twitter?!"

So! A vegan walks into an #unprocessed bar... and is totally overwhelmed and intimidated because this is new territory and she's pretty awkward in the kitchen.

Last week, this awkward vegan decided to take the Eating Rules October Unprocessed challenge and pledge to eat only unprocessed foods for the whole month. I didn’t think it would be that big of a deal because I eat unprocessed food most of the time, anyway.

But not all the time. I had to purge my refrigerator of Earth Balance, almond milk, and store-bought guacamole and purchase purer alternatives to my soy sauce, hummus, peanut butter, and soy milk.

One of my biggest hurdles would be CLIF bars, since they’ve been my go-to starvation-prevention snack for the past six months. I don’t actually end up eating too many of them – maybe one or two per week – but I like just knowing they’re in my purse in case I need them.

My friend Tania commented on the post in which I announced my pledge, suggesting I make my own CLIF bars and attaching a recipe. Using that recipe and some similar ones (and enlisting the help of my Reasonably Skilled Alter-Ego, who manages all the trickier tasks in the kitchen), I concocted the following recipe: 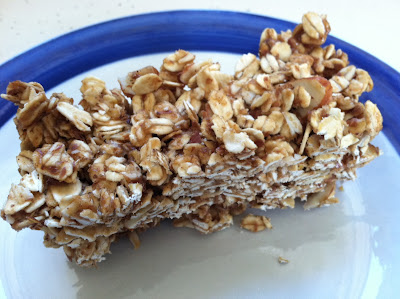 First, I mixed the oats, flax, and almonds together in a big bowl: 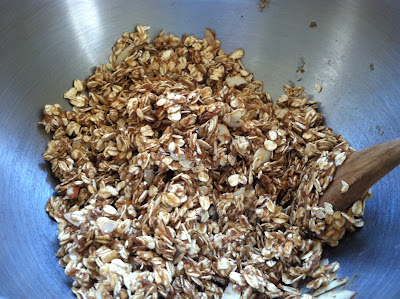 Then it was time to enlist the help of my Reasonably Skilled Alter-Ego. She brought the maple syrup and brown sugar to a boil in a pan, stirring them constantly. Obviously, they didn’t burn to the bottom of the pan because unlike me, my alter-ego is a Person of Reasonable Skill. Then she removed them from the heat and mixed in the almond butter and vanilla extract: 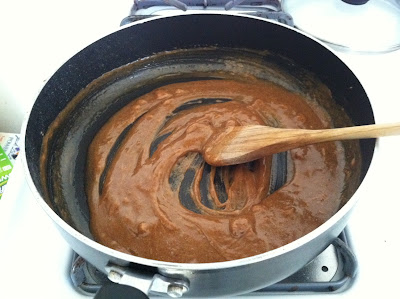 I poured the melted stuff over the dry stuff and stirred it all up. I packed it into an 8-inch pan and wondered how it would ever turn into solid bars. It just didn’t look like it would hold together. So I stuck it in the refrigerator to cool for about an hour. When I took it out, it was holding together just fine and I was able to slice it into bar-sized snacks.

They’re tasty! Unfortunately, when you try to pick them up to bite into them on a hot day (like today), they kind of fall apart. Oh, well. I still mark this as a successful foray into unprocessed cooking and it gives me hope for the coming month.

So a vegan walks into an unprocessed bar... that she made from scratch herself... and eats the whole thing right before yoga class, pretty much guaranteeing an upset stomach. The end.
Posted by Unknown at 11:05 AM