Yam I Am and Lentil Stew

My always-inspirational sister, Katie, sent me an email the other day with a link to this delicious soup recipe she had just successfully made. She had purchased a crock pot for $1 at a yard sale earlier in the week and was thrilled to have put it to good use.

I wanted to try the recipe that came so highly endorsed, but there were two obvious obstacles. First, it wasn’t vegan. Second, it would take forever to make. Who waits four hours for soup? I don't have that kind of time. And if I did, I wouldn't spend it waiting for soup.

I was feeling confident after my sweet potato success from last weekend, so I decided to take some pointers from my Reasonably Skilled Alter-Ego and go about inventing my own vegan version of a soup involving lentils and root vegetables.

I decided to go with yams, since they've always seemed really weird to me. I never tried them growing up because I was suspicious of them. They were kind of like my green eggs and ham (which, by the way, I tried and liked in my pre-vegan days). But there was no Sam I Am to convince me to try yams, so it just never happened.

I would be my own Sam I Am. And I would try my vegan version of green eggs and ham: lentils and yam.

I hopped out of bed this morning (I apologize for being one of those people who hop out of bed in the morning) and immediately headed to Whole Foods to pick up some ingredients. I made the mistake of not eating breakfast beforehand, so I was hungry while I shopped and ended up purchasing quite a few random things in addition to what I needed for my soup recipe.

… Eighty dollars later, I was ready to get to work. Here’s what I came up with:

Yam I Am and Lentil Stew 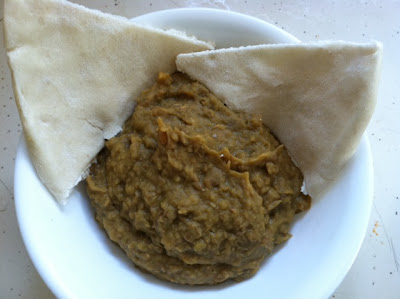 For the vegetable broth, I used Whole Foods’ 365 brand since it’s unprocessed. Its only ingredients are purified water, carrot, celery, onion, sea salt, and onion powder; my Reasonably Skilled Alter Ego could totally prepare that stuff, no problem.

I figured I should probably soften the yams before adding them into the mix, so I boiled them for fifteen minutes while I was getting the rest of the soup ready.

While the yams boiled, I put the coconut oil, chopped onion, and garlic in a big pot and sautéed them for a few minutes. I knew from past experience that if you don’t stir garlic often, it will burn… and that if you use a wok instead of a pot when preparing lentil soup, you end up with a huge pile of wet lentils.

After a few minutes, I poured in the vegetable broth and the lentils. My Reasonably Skilled Alter-Ego knew that it would be a good idea to bring the whole thing to a boil, then reduce it to a simmer for about 45 minutes.

I don’t know how she knows these things.

So while she dealt with that, I removed the yams, rinsed them, and chopped them into small cubes: 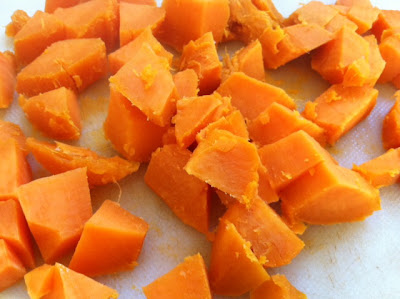 I still hadn’t decided whether or not to puree this stuff – it would depend on how mushy the yams got while they simmered. I tossed them into the pot with the rest of the ingredients, covered it, and waited.

While I waited, I nommed on some Ethnic Breads whole wheat pita, one of the random things I had purchased while grocery shopping on an empty stomach. It tasted so good that I decided to dip it in my stew later.

After 45 minutes of simmering, the lentils had absorbed all the broth and the stew looked like this: 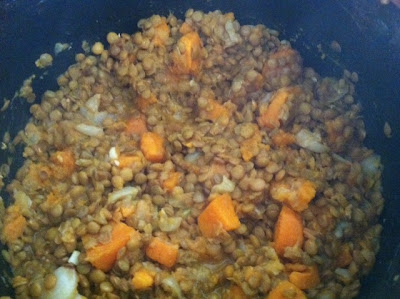 I stirred in the soy milk and salt, but it was still too much like a pile of lentils and not enough like a stew. So I put it in the blender (which, unlike some other blenders, has yet to explode in my face) and pulsed it a few times to make it mushy.

It was much thicker than I had anticipated, so I used the Ethnic Breads pita to scoop it up, naan-style. It tasted good. So. Good. The texture was perfectly stew-like and the taste combination of lentils and yams was incredible.

Say! I like lentils and yam! I will eat them in a house (done), probably not with a mouse, definitely in a boat (if I had one), and maybe with a goat. Maybe.
Posted by Unknown at 11:37 AM