My roommate Erin and I have been living in our little cottage for a few months now, but recently we were struck by how cold it was feeling. Especially at night. Someone else might have attributed the chill to the fact that the cottage was built almost one hundred years ago, or that it has hardwood floors and drafty windows. We came to the alternate conclusion that the cottage was cold because we hadn’t yet had a house warming party (or in our case, a cottage warming party).

The best kind of party is a potluck dinner, because it creates a sense of community participation and because it means you don’t have to cook all that much. So that's what we decided to have.

Obviously, there were no meat dishes allowed. But we did leave room for people to bring vegetarian dishes if they wanted instead of only vegan dishes. That's because we thought some of our friends might get intimidated by the idea of making vegan food, panic, and decide not to come at all. Then our potluck would turn into a potsuck.

But it wasn’t a potsuck. It was a success! I decided to make some grilled veggies (easy enough), a fusilli pasta dish with avocado sauce, sweet potatoes, and chocolate tofu mousse (now famous among my parents’ friends). The pasta dish ended up being pretty tasteless, so I won’t share the recipe with you because it’s too embarrassing. 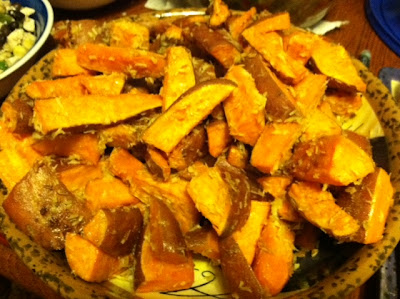 First we preheated the oven to 350 degrees. Then we washed the sweet potatoes and cut them into the size of think French fries. We filled a large zip lock bag with the maple syrup, coconut shreds, and olive oil, dumped the sweet potatoes into the bag, and massaged the other ingredients into them. Here’s Maureen, massaging the sweet into the potatoes: 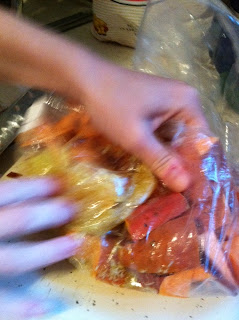 When the potatoes were thoroughly coated, we stuck them in the oven for about 40 minutes. We could tell they were done when we poked them with a fork and found them to be mushy. They were a hit! My new friend Kevin said they tasted like pancakes… which is a good thing, of course.

Here are some of the other dishes my friends brought (nobody brought that single beer you see - I just had to place that down on the table so I could take the picture): 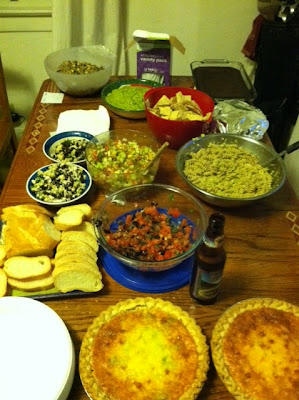 The only thing that ended up potsucking about the potluck was that around 11 o’clock, my little old landlady knocked on the door in her nightgown and told us to shut up. I had to bring her the rest of the delicious snickerdoodle cookies my friend Helena had baked to make amends the next morning.
Posted by Unknown at 3:09 PM