One of the best parts about writing a vegan blog is that my friends (and sometimes people I don't know) are always sending me recipe ideas. And I am proud to say that I have turned the task of tackling the recipes people send me into an effective procrastination tool.

I was supposed to be working on a music theory exam this weekend. It was one of those exams that you take home to work on, and by Friday afternoon it was already destroying my life.

So I made the obvious decision to make enchiladas instead. My creative friend Bonnie had sent me a recipe for regular-people enchiladas, so I would have to veganize them (and de-spicify them – I’m not going anywhere near jalapeno peppers).

Unfortunately, to make the vegan enchiladas I would need to use two processed ingredients: Daiya vegan cheese and enchilada sauce. I probably could have recruited my Reasonably Skilled Alter-Ego to make some enchilada sauce from scratch, but she’s been getting a big head lately so I wanted to prove to her that I could do some things on my own.

I’ve taken the Eating Rules October Unprocessed pledge, so I’m avoiding processed foods for the month and I wouldn’t be able to eat the enchiladas myself. Luckily, my friend Jason was having a party that evening; surely the people at his party would want to eat my enchiladas. I would just have to go to the party instead of working on my take-home exam.

What? I couldn’t waste the enchiladas. 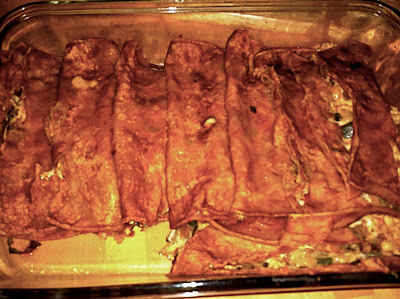 First things first. I pre-heated the oven to 350 degrees, greased a shallow glass baking dish with coconut oil, and put the enchilada sauce in a small pot to simmer.

Then I tossed the zucchini, corn, and onion in a wok to saute in some coconut oil. While they were sauteing, I put the Daiya, cumin, and cilantro in a big mixing bowl. When the sauteed ingredients were ready, I added them to the bowl and mixed everything together: 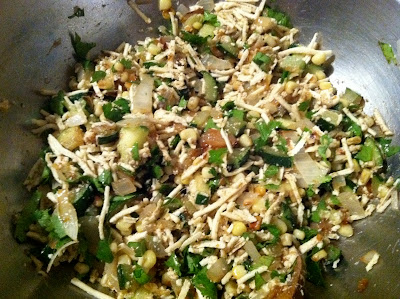 Now on to the tricky part. One of the annoying things about my kitchen is that there is no counter space next to the stove. So I had to balance the bowl of filling, a plate, the glass baking dish, and the package of tortillas on the three empty burners (the simmering enchilada sauce was taking up the other burner). Spoiler alert: I didn't catch on fire.

I poured about a cup of the warm sauce onto the plate. Then for each enchilada, I coated a tortilla in the sauce, put about a half cup of the filling in the center of it, did my best to roll it up, and placed it in the glass baking dish. I had no idea what I was doing.

Things were going well at first. But then the tortillas started to crack and the filling started to ooze out. I just kept cramming them into the dish, telling myself that enchiladas are supposed to be messy. What else could I do? Ask my stupid Reasonably Skilled Alter-Ego for help? Yeah, right.
When the dish was full of not-quite-whole enchiladas, I put it in the oven to bake for 40 minutes. That gave me some time to work on my exam get ready for the party.

Amazingly, my vegan enchiladas were a hit. It was a little ridiculous that I brought them to the party in the first place, since it turned out to be a rather fancy cocktail party. But no matter. They looked like a disaster but they tasted great (I even cheated and tried a little myself). Who's "reasonably skilled" now, Alter-Ego?
Posted by Unknown at 10:30 PM