Two summers ago, I visited my sister Katie in Ecuador, where she was serving in the Peace Corps. We spent some time traveling around the country to Quito, Cuenca, Mindo, and the little towns where her fellow Peace Corps volunteers lived, then ended up at my sister's site for a week.

Katie lived in Caimito, just north of Atacames in the province of Esmeraldas. It's on the coast of northern Ecuador and has gorgeous beaches and waterfalls. But I would have gone absolutely bonkers living there for two years like my sister did. She is so hardcore.

Chickens wandered in and out of her little house. There was a gap of about a foot between the top of the walls and the roof, so at night bats flew in. Even though I slept under a mosquito net and kept my body constantly slathered in DEET repellent, I left Caimito with so many bites my body looked like one big, puffy red welt. There were no showers, so to clean themselves, people just dumped buckets of cold water over their naked bodies outside in the backyard.

Lucky for Katie, her boyfriend in Caimito was a bamboo carpenter. He built her an outdoor shower with a curtain and a compost toilet with a view of the ocean. He even built a water tank outside the kitchen so she could have "running water" come out of the faucet at the kitchen sink.

Needless to say, Katie had gotten pretty clever with preparing food. She had invented recipes for baking bread in a toaster oven and a bunch of different variations of octopus- and fish-based meals (including peanut butter and fish bone soup, which was, incredibly, not bad).

But my favorite Ecua-meal Katie made for me involved the easiest ingredients for her to find: plantains, yucca root, and avocados. In Ecuador, people practically give away avocados. There are just too many of them to use, and you often see them rotting on the ground where they've fallen.


After being inspired to purchase the ingredients I'd need at Lazy Acres, I decided to cook up an Ecuador-style meal. Because my kitchen is in Santa Barbara (and because I like dorky word combinations), I'm calling this fusion cooking "Ecua-fornia Style." Here's what I started with: 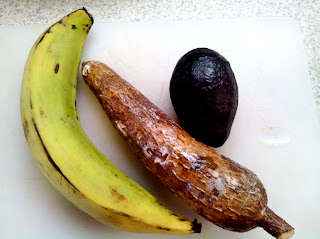 First I peeled the yucca root with much difficulty. Its skin was waxy, crumbly, and a lot more like bark on a tree than skin on a vegetable. I cut it into three sections and boiled it in a pot for 25 minutes. Then I cut it into little blocks.

Meanwhile, I sliced the plantain into long strips and grilled them in coconut oil. I don't think people cook with coconut oil in Ecuador, but there certainly is ample access to coconuts. Just for fun, here's a picture of my sister trying to slice a coconut open with a machete: 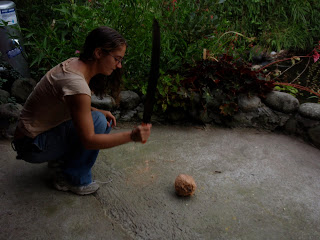 That coconut didn't stand a chance.

The rest of the preparation for my Ecua-fornia Stye meal was pretty simple. I threw the chunks of yucca in with the plantain strips to grill for a bit. Then I sliced up an avocado I had bought at Plow to Porch. I arranged everything in a bowl: 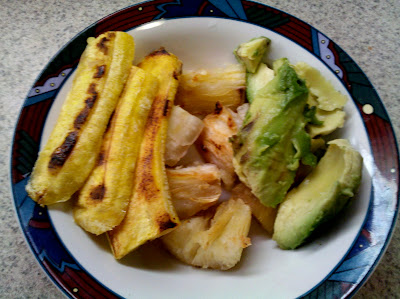 It tasted pretty good. Yucca has a potato-like texture but stringier, and it complimented the mushy avocado quite well. I was disappointed with the fried plantains, though - I don't think I grilled them long enough, so they were still kind of starchy inside.

Oh, well. I think I'll attempt Ecua-fornia cooking again when Katie comes out here to visit me at the end of the summer. She's a much better cook than I am in general, and she has so much experience frying plantains that I bet they never come out starchy. I'm looking forward to coming up with other Ecua-fornia fusion foods together! Just as long as peanut butter and fish bone soup is not involved.
Posted by Unknown at 12:30 PM