Why Did the Fake Chicken Cross the Road?

… the answer to this riddle depends a good deal on whether the fake chicken in question has legs. The one I’m imagining does not have legs, so the answer is: “It didn’t. It had no legs.” ZING!

If you imagined a fake chicken with fake little chicken legs, then the answer is: “Because, since it was not a real chicken, it did not live on a factory farm and had the freedom to do whatever it wanted to.” ... zing?

On my recent trip to Lazy Acres, I bought some fake chicken nuggets on a whim. They looked delicious on the box, and sometimes that’s all it takes to convince me. Specifically, these were Health is Wealth All Natural Chicken-Free Vegan Meatless Stone Ground Whole Wheat Breaded Nuggets.
What a mouthful. Would that mouthful be delicious?
Tonight when I got home from yoga, I decided to find out. I was starving as always. So there was no time to prepare the fake chicken in a fancy, oven-dependent way. I went for the microwave directions, which were: arrange 6-8 chicken nuggets in a circle on a microwavable plate, with two paper towels beneath them. Heat for one minute. Rotate them and heat for another minute.
Well, we don’t believe in using paper towels here at Tigh Vino (remember: two out of the three of us are finishing up Masters degrees in Environmental Management). Miraculously, even the microwave directions had turned out to require too much from me.
Oh, well. These fake chicken nuggets were probably destined to taste wacky anyway. I went for it, sans paper towels.
Here’s what they looked like post-microwave: 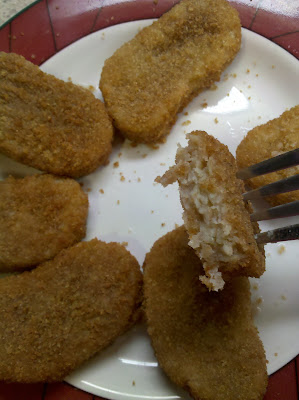 These little guys tasted… well, they tasted like chicken. Not like McDonald's chicken nuggets or anything, but they were pretty indistinguishable from any other frozen chicken nuggets I've tried.
I’m still not a fan of the idea of fake meat in general, but I think if something must pretend to be a meat, chicken is the best choice. So many things just taste like chicken already – it makes sense that you could batter one of those things (in this case, soy protein) and call it chicken.

So here's an alternate, less-depressing punch line for "Why did the fake chicken cross the road?" ... Because it was in my belly, and I crossed the road (to get to the Shell station).
Posted by Unknown at 11:05 PM