Sacha Baron Cohen would never have to break my arm to get me to say that I love crêpes. I say it every time I pick up a menu and see crepes listed as one of the options. I just yell it as loud as I can, right before I order one. And I don't lower my voice before I order, either, so it comes out like, "I LOVE CRÊPES AND I WILL HAVE THE CRÊPE SUZETTE PLEASE WITH EXTRA ORANGE ZEST!"
Arrow Street Crêpes is one of my favorite places to eat in Harvard Square whenever I'm home visiting my parents. The closest thing I've found to a replacement out here is Café Crêpe on the 3rd Street Promenade in Santa Monica. Andrew and I ate breakfast there before we took a lesson on the flying trapeze at the Santa Monica pier last year, and let me tell you: I was awesome at the trapeze. I think it had to do with the crêpes.

The other day, my friend Aliana invited me over to her apartment for crêpes. She said that her boyfriend, Stefan, makes incredible crêpes. Well, people say that their boyfriends make incredible lots of things that aren't that incredible, so I wanted to see for myself. Then I realized: I can't eat crêpes. Not even a little bit. On a scale from one to "I can't eat this," crêpes are the equivalent of cracking an egg into a bowl of cow's milk and washing it down with a bloody steak.
Well, I'm exaggerating. I didn't want to be left out of the crêpe fun, so I showed up at Aliana's house with all my vegan substitutes. Stefan got to work making some yummy non-vegan crêpes for Amy and Andrew, and I got to work mixing up a vegan crêpe batter. Stefan gave me his recipe, but I halved it (since I can only eat so many crêpes) and made some substitutions:
1/2 cup flour
1/4 cup sugar
pinch of salt
1 tsp vanilla extract
1 cup almond milk
1 tbsp flax seed + 2 tbsp water (egg substitute)
I was nervous about using flax seed as an egg substitute, since it hasn't always worked out for me. But I figured that if Stefan just dumped my vegan batter onto a crêpe dish and tilted it around, something would happen. It might not be a successful crêpe, but it definitely would be something I could put fruit on top of and pour 100% pure maple syrup all over.
According to Stefan's directions, I mixed all the dry ingredients in a bowl and added the almond milk slowly, mixing it up as I went. Stefan said adding the milk that way keeps clumps of powder from forming and ruining your crêpes. Then I added the vanilla and flax seed mixture and handed my batter over to Stefan. I waited anxiously, totally cramping Stefan's style by creepily peering over his shoulder with my camera:
It worked! My vegan crêpe was a bit brittle in comparison to normal crêpes, which are usually kind of rubbery because of the eggs. It was also a bit thick; as Stefan says in the video, it was "kind of a pancake/crêpe hybrid." But I didn't mind. I stuffed it with strawberries, bananas, cinnamon, and sugar, and I covered it with 100% pure maple syrup (but that goes without saying), like so: 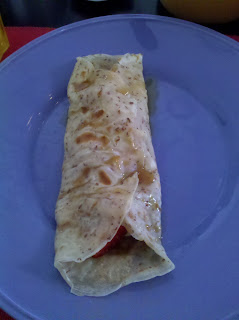 I was pretty excited to have satisfied my crêpe craving in a vegan way. Even though I won't be able to order crêpes in restaurants anymore, I can just make my vegan version at home and yell, "I LOVE CRÊPES!" to myself before I dig in.
Posted by Unknown at 11:17 AM