On my past two birthdays, I've had minor emotional crises. That's because my mom came up with clever ways to make my first 22 birthdays awesome, and my 23rd and 24th never stood a chance at measuring up. At our house, birthdays were sacred.

For as long as I can remember, my mom would bake us a muffin for each year we had been alive and arrange them into the shape of the number we were turning that day. We weren't even annoyed at having to share the muffins with everyone else because by the time we were old enough to be bratty, there were too many muffins to eat on our own.
Then she got the idea to hide our gifts around the house and make a scavenger hunt key for us to use to figure out where they were. Her clues were usually less than enlightened (along the lines of: "Look high, look low, look where the cups and plates go!"), but it didn't matter. Some of my best childhood memories were made tromping around the house after my sister or brother yelling, "You're getting warmer!" as they struggled with my mom's often-cryptic clues.

Moving to college didn't hinder the birthday festivities. On my 21st birthday, my whole family showed up at my dormitory suite and recruited my roommates to participate in a game of Meghan-themed Jeopardy!. My mom played an mp3 of the Jeopardy! theme music and called out hints along the lines of, "This is the name of Meghan's best friend from her fifth-grade soccer team," while everyone scribbled their best guesses on small whiteboards. (Nobody got that question right. I don't even remember who it was.)

So the transition to celebrating my birthday without my family was traumatizing. It seems that nobody else cares about birthdays nearly as much as the Joyce family, and that most people even think I am unreasonable for expecting them to sing "Happy Birthday!" to me in joyful harmony at every opportunity.

I came home from yoga on the night of my birthday to find Amy and our friend Aliana sipping champagne in celebration while Emily baked a vegan chocolate cake. She used this recipe. Here's what the final product looked like: 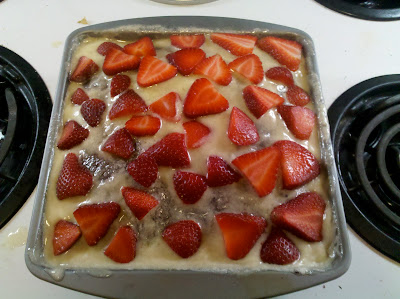 She invented the recipe for the frosting herself (but she wants it to be known that this recipe resulted in all together too much frosting):
1/2 cup Earth Balance butter substitute
1 and 1/2 teaspoons vanilla extract
1/4 cup soy milk
1 cup sugar
The frosting kind of melted into the cake (because we were too impatient to let the cake cool all the way), making it even more delicious.
But the veghan birthday fun did not stop there. On Saturday, I had a small birthday dinner at Sojourner Cafe in downtown Santa Barbara. There are lots of reasons to love Sojourner Cafe: they use local produce, their service is friendly and flexible, and there are many vegetarian and vegan menu options. Their dessert list even includes handy indications of whether the plates include honey, dairy, eggs, nuts, wheat, gluten, etc.
I decided to split the Japanese Wakame Sea Salad from the specials list with Amy. It came served on a bed of brown rice (which nicely balanced the strong seaweed flavor) and greens: 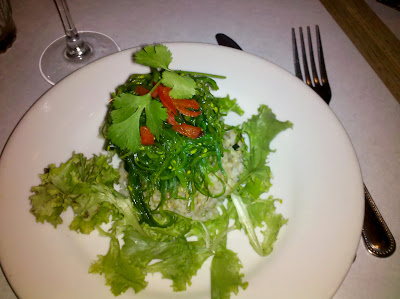 For a main course, I ordered the Vegan Jumbo Pasta Shells served with non-dairy garlic toast, mostly because I was curious about the tofu "ricotta" cheese the shells were filled with. As it turns out, I prefer fake ricotta to actual ricotta (although I think ricotta is the only cheese for which this would be the case), and I plan to call up Sojourner Cafe and bribe them into giving me their fake ricotta recipe. Here's what my meal looked like: 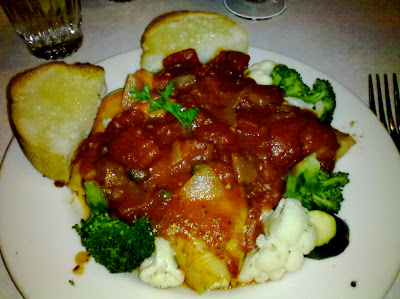 The dessert menu had more vegan options than the main course menu, but most of them didn't sound all that appealing to me. Apparently, you need to order dessert immediately upon arrival at Sojourner Cafe in order to guarantee that you get what you want. They only make a certain amount of each dessert and when it's gone, it's gone. Tough cookies, so to speak.

And now I have a confession to make. I ordered the "Almost Vegan Chocolate Chip Cookie." Of course I had to inquire about why it was "almost" vegan and not completely vegan. The waitress explained that although the cookie itself is vegan, they don't use vegan chocolate chips (?!).

That is so weird to me. If you're going to go to the trouble to make a vegan cookie then why... argh, I ordered it. And I ate it all up, non-vegan chocolate chips and all.

After dinner (and first dessert), we came back to my apartment for some more vegan cake, courtesy of my friend Emma. Guest blog post to come!
Posted by Unknown at 9:40 PM