Guest Post by Emma McCullough: Meghan the Veghan Has a Birthday

Meghan's blog has quickly become one of my new favorite procrastination tools. It's funny, sometimes my friends and I get shout outs, and as someone who likes to cook and bake, I've learned a lot. When I realized Meghan's birthday was coming up, I suggested that maybe I could make her a vegan cake and write a guest post on her blog.
I'm not a vegan and could never survive as one. All forms of cheese (especially string cheese), decadent non-vegan desserts, and disgustingly processed junk food are all too much a part of my life for that. I am a pretty avid baker, though, so I was interested in trying to bake something vegan-friendly.
I have a friend who doesn't eat eggs for religious reasons, and I attempted to make a cake he could eat last year. I just used a box cake mix, but substituted about ¼ c. of applesauce per egg, as the internet suggested. It came out looking like this: 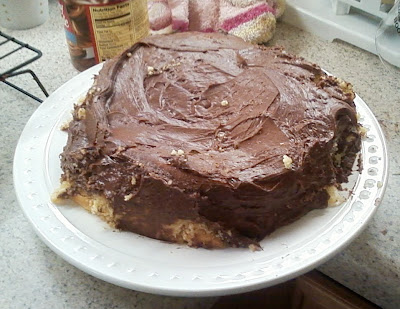 Not so appetizing, right? It was SO fudge-y that it was impossible to frost. The boys thought it tasted pretty good, but I wasn't impressed by it. It was too moist to be considered cake. Thus, I was a little nervous going into my second adventure with vegan cake-making. The stakes were higher this time since there was a birthday involved!
I sat down one day this week to look for a recipe online. The first recipe I clicked on touted itself as “The BEST chocolate cake ever...that happens to be VEGAN!” As I was looking at the recipe I realized that it looked kind of familiar. (It's not often you see vinegar in cakes.) I went to my recipe box and found an almost identical recipe that my mom and I have been making for years and love. We know it as “chocolate snack cake.” Really, it should probably be called “chocolate anytime cake,” because I'm positive I've eaten it for breakfast, but I think the fact that it doesn't have frosting (in our version; the online version includes a recipe for glaze) is what earned it the name.
At first I was a little torn about using a recipe I already knew well. Meghan is so good about trying new recipes for her blog posts and I felt like using a tried and true recipe went against the spirit of the blog a little, but since it was her birthday, I decided I'd rather not risk having a sub-par cake in case something went wrong.
It's an easy recipe:
Preheat the oven to 325 and grease an 8x8 square pan (with canola or soy bean oil, if you're going for a vegan-friendly cake).
Combine:
1 2/3 c. all-purpose flour
1 c. light brown sugar, packed
¼ c. cocoa powder
1 tsp. baking soda
and ¼ tsp. salt
Add to the dry ingredients:
1 c. water
1/3 c. vegetable oil
1 tsp. vinegar
¾ tsp. vanilla extract
Beat until smooth and top with ½ c. chocolate chips (again, if you want it to be vegan, be sure they're semi-sweet, not milk chocolate). I don't measure the chips... I just sprinkle them on until it looks suitably topped.
Bake 45 minutes, or until a toothpick comes out clean and cool on a cooling rack. (Because the cake is covered in chocolate chips, it can be difficult to get a clean toothpick reading. Use your best baking judgment.)
I was nervous that I'd make some kind of dumb mistake and the recipe would turn out non-vegan friendly, so I was pretty careful about checking labels. The chocolate chips were fine—apparently cocoa butter is no relation of regular butter.
The first bottle of vanilla extract I grabbed from my cupboard made me question its vegan-friendliness, so I moved onto a second that was pure vanilla extract (as opposed to the bourbon kind... sorry Meghan, no booze in this cake).
For vinegar, I usually use plain white vinegar (which I use for this cake, dying Easter eggs, and nothing else), but my bottle had disappeared, so I used what I had, which was white balsamic vinegar from Trader Joe's. I'm sure you could use whatever you have on hand.
The online version of this cake suggested mixing the whole thing IN the cake pan. This is an intriguing idea. I always support having to do fewer dishes. I recently made a recipe without benefit of my beautiful Carolina blue Kitchen Aid stand mixer, though, and decided that there was really no way to live without it. It's so much easier to get things mixed well quickly (which is good both for time-saving and for the texture of the baked good) with the mixer.
Plus, I didn't want there to be unsightly residue on the side of the pan. What would Martha Stewart say?!?!
The online version of this recipe also included a vegan-friendly chocolate glaze, but I was tired and short on time, so I decided that I would just dust it with powdered sugar to make it a little fancier. Here is Meghan with her cake: 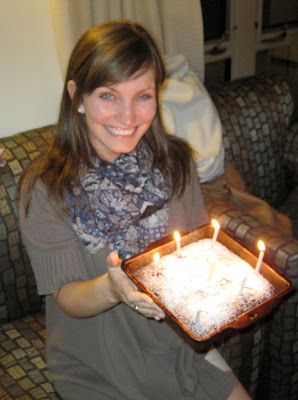 And here's a slice up close: 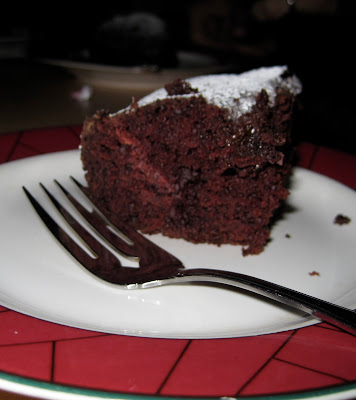 So there you have it: my first real vegan baking experiment and my first blog post! I think if I was going to try it again, I'd be a little more daring and try a new recipe. It's nice to know that I have a good vegan recipe up my sleeve, though!
Posted by Unknown at 10:21 AM