I think I probably would be offended by the lyrics of Ol' Dirty Bastard's Shimmy Shimmy Ya if I understood what he was talking about. So I choose to believe that when he says, "Oooh Baby I like it RAW!" he is just expressing his commitment to the raw foodist lifestyle.
The raw food movement, whose adherents only consume foods that have not been heated above 115 degrees Fahrenheit, is based upon the idea that when food is heated it loses many of its natural enzymes and can even be harmful and toxic. Most raw foodists are vegans, but there are also omnivorous raw foodists, as well as some who eat only meat.

I always strive to emulate Ol' Dirty Bastard (except for, you know, the whole drug overdose thing), so I wanted to try some raw food. Obviously, I eat raw food all the time (like carrots, almonds, and other things that just make sense to eat raw). But I am not creative enough to come up with fancy raw food recipes, so I knew I'd have to seek out a raw food restaurant. And I knew it would have to be in LA, since Santa Barbara doesn't have a lot of vegan options.

Conveniently, I was in LA yesterday to pick my parents up at the airport when they arrived from Boston. They were stahving. (People from Boston don't starve, they stahve.) Since I was the one driving, we could go to whichever restaurant I wanted, so we shimmy-shimmy-ya'd (i.e. drove) on over to Better Life Cuisine in Santa Monica.

It doesn't even make sense to rate Better Life on a scale from Vegan Easy to Meat and Cheesy, since everything there is vegan.

My parents were good sports. My mom spotted manicotti rolls on the menu and suggested them to my dad: "Oh, John, don't you love manicotti rolls? You should order those." My dad pursed his lips together into a tense smile and nodded enthusiastically: "Oh, yes, Mary. I do love manicotti rolls. And I bet the vegan version is just as delicious."

The ingredients listed next to the manicotti rolls were marinara sauce, parmesan cheese, alfalfa sprouts, zucchini, ricotta cheese, and basil. Two types of cheese? Spelled with an s and not a z, no less?

Well, as it turned out, the ricotta cheese (much like the ricotta cheese at Sojourner Cafe in Santa Barbara) was made of tofu and the parmesan cheese was made of almonds, turmeric, and salt. The manicotti rolls were not even made of pasta (since pasta is, of course, cooked at a temperature above 115 degrees); instead, the tofu ricotta was wrapped in thin slices of zucchini: 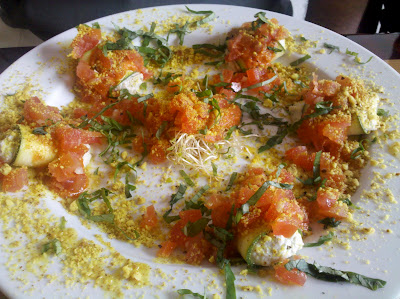 The yellow powder all over the whole thing is the fake parmesan cheese.

Andrew, fooled by the misleading menu, was considering the Salmon Wrap. But then the chef revealed to him that the "salmon" was actually dulse (a type of red seaweed), dill, and nama shoyu (unpasteurized, "raw" soy sauce). Andrew went with a strawberry smoothie.

Meanwhile, my mom and I both ordered the lasagna, which was quite filling and tasted, in my opinion, better than a lot of regular lasagnas. Again, no pasta was involved: 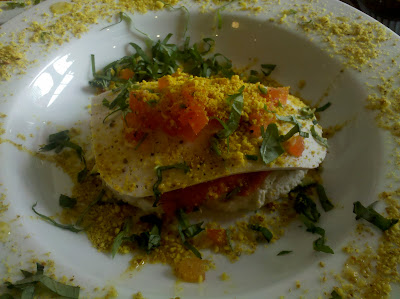 As a side, we got the kale salad. It was, contrary to its rave reviews on Yelp.com, kind of bland. There was nothing wrong with it, it just wasn't satisfactorily flavorful: 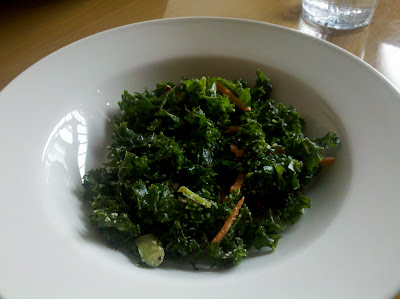 And for dessert, we split a cinnamon roll. We couldn't agree on what we tasted in the cinnamon roll, but we suspect there were dates involved. It was quite dense and sweet: 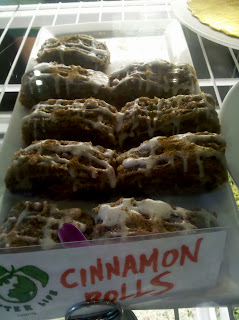 They might have been humoring me, but everyone said they were pleased with their raw vegan meals. I was pleased, too. Liking it raw might not be the best lesson I've learned from Ol' Dirty Bastard, but it's definitely up there in the top five. Right behind always recognizing that if I want to look good and not be bummy, I better give him his money.
Posted by Unknown at 8:00 AM