Happy Graduation! I Made You a Salad.

Well yes, it is hot enough for me, and luckily it is also too hot to grill. So at my little brother Brian’s college graduation party today, I didn’t have to deal with the stench of burning meat.

Actually, my mom was really considerate of my veganism while purchasing and preparing food for Brian’s party. She bought some roll-ups and finger sandwiches with cold cuts in them, but she spent a lot of time preparing delicious vegan salads as well.

I was able to pull together a plate that looked like this: 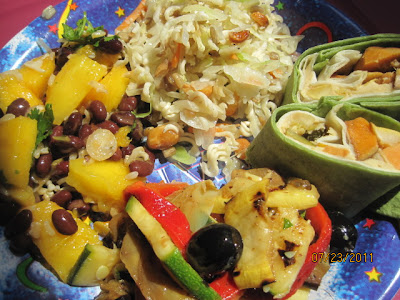 Ridiculously, that paper plate says, "Reach for the Stars!" on it.

Aside from the hummus/roasted vegetable roll-ups and the grilled veggies, there were two yummy salads. Here are the recipes (they're salads, so you know... just throw everything in a bowl together):

And there was fruit salad for dessert! So many salads.

I have to admit, I still get nervous in social situations where people are eating non-vegan food. I worry that they will notice I am not eating the food and will confront me about it. Sometimes I appreciate the opportunity to explain why veganism is a good idea, but most of the time I just feel slightly awkward and (strangely) apologetic.

But I am proud to report that there were hardly any conversations about veganism at this party. One of my aunts did tell me I had “gotten all California” since I left the east coast, but since she didn’t specifically cite my veganism, I could pretend she was just talking about my flowy scarf and laidback demeanor.

I did have a conversation about bees and whether vegans should eat honey, this time with my Uncle Timmy. He is a peaceful, kind vegetarian who raises bees as a hobby. Unlike my energetic friend Katie, who on more than one occasion has attempted to convince me of the benefits of a honey-eating lifestyle, Uncle Timmy didn’t seem to care one way or the other whether I ate honey. But he did describe the process of gathering the honey, and he said it seemed like the bees really didn’t mind it. So eating honey is back on the table (so to speak).

This party felt like a turning point for me. Yes, my mom catered to my vegan diet in choosing which foods to serve. But my veganism really wasn’t an issue otherwise. Everyone could focus on how awesome it was that Brian had graduated from college and not worry about what I was (or was not) eating.

Months ago, when I first told Brian that I was a vegan, he chuckled and said, “Hey, maybe you could try eating some weirdo vegan food while you do some yoga on the beach. Do you think you could be any more of a stereotype?” But today he ate the delicious vegan food my mom had made and didn’t mention the word “vegan” once. Maybe I’m kidding myself, but it seems like people back home don’t think veganism is so crazy anymore.

You know what is crazy, though? This heat. Nobody complained that most of the food was vegan – maybe nobody even noticed. They were too busy going around asking each other, “Hawt inuff fawya?”
Posted by Unknown at 4:28 PM