I love artichokes. Seriously, I cannot overstate my love for artichokes. When I was in elementary school and we were learning how to make graphs by gathering information about each other and plotting it, I was the only student who answered "artichokes" for my favorite food. All the normal kids who answered "ice cream" or "pizza" made fun of me.

So I was thrilled to discover a can of artichoke hearts while nosing around in my parents' pantry. I knew that my mom also had a huge, Costco-sized bag of spinach she was trying to use up, so I decided to make spinach artichoke dip.

Spinach artichoke dip is, of course, usually quite cheesy. Most vegans substitute tofu for the cheese; you need to substitute something, or the dip won’t be smooth and spreadable. Unfortunately, I only had firm tofu and all the recipes I found online called for silken tofu (which has the most disgusting texture ever, but which is great in smoothies, desserts, and, apparently, spinach artichoke dip).

I was going to have to get creative. Back to the pantry. The only thing I could find in there that seemed like a reasonable substitute for silken tofu was a can of cannellini beans. I imagined the cannellini beans all blended up; they would have the same texture (and color, not that it mattered) as silken tofu.

I also considered the fact that I was in (a rural suburb of) Boston, otherwise known as "Beantown." I'm pretty sure that moniker originates from the dish Boston Baked Beans, which is just beans baked in molasses or sometimes maple syrup. So I convinced myself that it made sense to substitute beans for tofu when cooking in (okay, near) this city. I made the decision to use beans in my cooking as much as possible for the next couple of weeks, just to show respect.

Compiling various vegan spinach artichoke dip recipes I found online (and, of course, substituting cannellini beans for silken tofu), I came up with the following recipe:

I preheated the oven to 350 degrees. While it was heating up, I cut up the onion and artichoke hearts and started grilling them in the olive oil. The kitchen already smelled delicious. 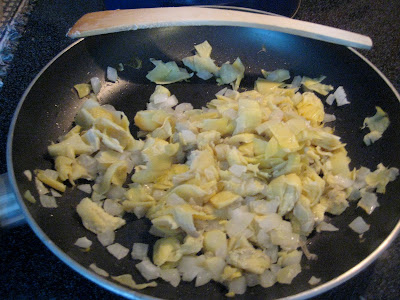 Then I dumped the cannellini beans, spinach, garlic, basil, parsley, salt, and apple cider vinegar in the blender. My mom grows basil and parsley out in her vegetable garden, so I was working with fresh herbs (to counter the less-than-exciting Costco spinach). Here's what the blended ingredients looked like: 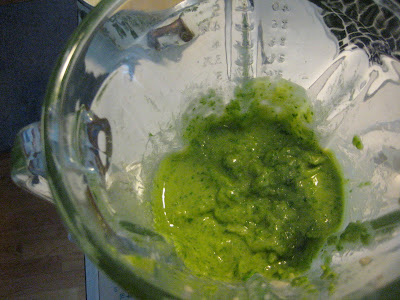 It was pretty gross-looking. But I had faith that once I added in the grilled onions and artichoke hearts and baked the whole thing, it would come out tasting great. I ended up baking it for 18 minutes, until it was just barely brown on top. Here's what it looked like: 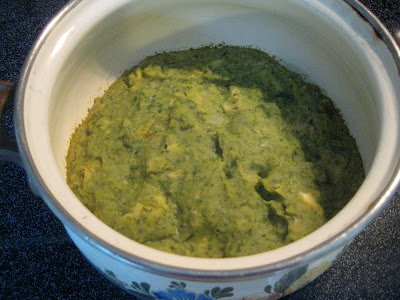 I scooped it out and served it warm with vegan chips, brown rice, and snap peas to my dad and to myself, like so: 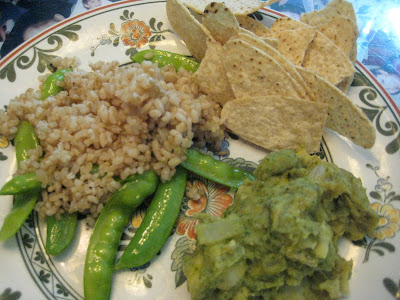 I think this dip was my most successful vegan cooking endeavor in a long time. The texture was perfect, just like the spinach artichoke dip you'd buy as an appetizer in a restaurant. It tasted awesome, and it's totally healthful! The recipe made quite a lot of dip, about 12 servings I'd say, so there's a lot left over for me to snack on in the next few days.

I think I have a new favorite food, just in case you're a second-grader collecting data for a graph. It's called Beantown Spinach Artichoke Cannellini Dip, and I invented it!
Posted by Unknown at 2:08 PM