I'd Turn Tricks for Treat

I don’t get the cupcake craze. Everyone’s into them and cupcake stores are popping up in cities all over the country, but come on. They’re the same minimum-effort dessert your third-grade classmates’ moms brought in for the whole class to celebrate their kids’ birthdays.

Plus they’re just a disaster to eat. It’s pretty much impossible to bite into one and not end up with frosting stuck to your nose (and maybe your eyebrows, depending on the size of the cupcake).

But I recently ate a cupcake and I liked it. I was with my friend Janie, who was on a mission to get some frozen yogurt after a decidedly vegan-unfriendly lunch in downtown Needham, Massachusetts. I figured I’d tag along, watch her eat the frozen yogurt, and sulk about how it wasn’t vegan.

We passed by Treat, a cupcake shop, and Janie suggested we go in: “Maybe they’ll have a vegan cupcake!” I knew it was unlikely, but Treat looked like the kind of fancy place that would be air-conditioned and it was about 100 degrees and humid outside.

Suddenly I loved cupcakes. I wanted to eat every vegan cupcake in that display case. But I had to settle for choosing just one (I’m on a grad student budget, here): Mint Cookies N’ Cream, a chocolate cake cupcake with a dark chocolate layer and mint cookes n’ cream frosting.

The girl who was serving me even ran back into the kitchen to get me the vegan version of an Oreo cookie to stick on top. It came in a little box that was reminiscent of Chinese take-out. It also came with a fork, so I could eat it without smashing it into my face. 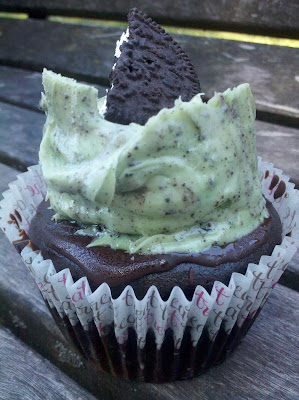 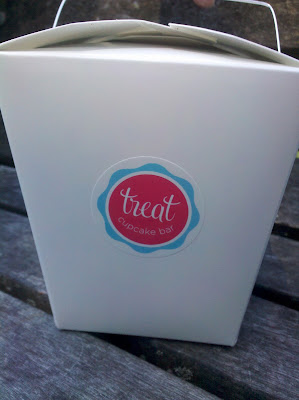 Janie seemed to enjoy her frozen yogurt, but not as much as I enjoyed my vegan cupcake from Treat. If only I lived around here so I could Treat myself (!) after every unsatisfying meal.
Posted by Unknown at 8:17 AM