You Are the Wheat Gluten Beneath My Wings

Last week, I ate lunch with my friend Kara at Milk Street Café. The people there were over-the-top accommodating; they had no problem letting me invent a vegan sandwich using their ingredients since they didn’t have one on the menu, and they even recommended another establishment nearby as a more vegan-accessible alternative.

The restaurant they recommended is called My Thai Vegan Café. The only way this place could be any more of a hole-in-the-wall would be if it were literally a hole drilled into a wall. But who wants to eat in an actual hole in a wall? It would be so cramped.

I met my other friend, Katie, at South Station and we walked over to China Town. My Thai Vegan Café is on a corner next to a deserted lot, and you have to climb up a sketchy-looking staircase to get to it. Just being on the staircase makes you feel like you're taking a risk of some kind, but to make it worse there are open windows with no screens along the side of it. Maybe this wouldn't bother anyone else, but I got nervous about plummeting down into the deserted lot below.

The restaurant itself is quaint and clean, there’s a lot of open space, and the servers are a bunch of adorable middle-aged Thai women whom you can imagine serving their own children the same delicious food at home (assuming their children are vegan).

As a starter, we ordered the Golden Triangles (mostly because the name sounded mysterious): ground fake chicken, onions, mushrooms, garlic, lemongrass, some other vegetables, and curry spices deep fried in wheat flour and served with peanut sauce: 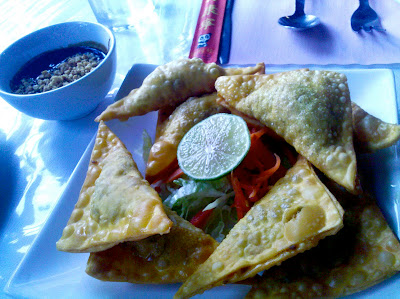 Then we got the Pad Thai (an obvious choice). It was some of the best Pad Thai either of us had ever eaten: 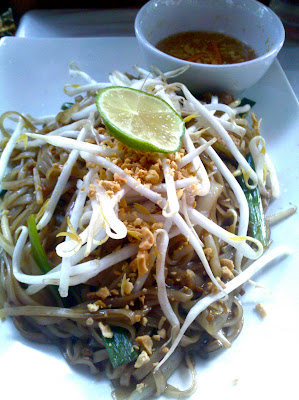 As a second entrée (we didn’t realize how much food this would actually be), we ordered the Cashew Nut Chicken. Katie made the decision to substitute “duck” for the “chicken” because, as she said, she had no idea what actual duck tasted like. So she would be less likely to be disappointed by whatever the fake duck was than by whatever the fake chicken was.

The “duck,” or “mock duck” as it is known in hip vegan circles (of which I strive so hard to be a part), was served with roasted cashews, onions, mushrooms, red bell peppers, snow peas, scallions, and celery. It looked like this: 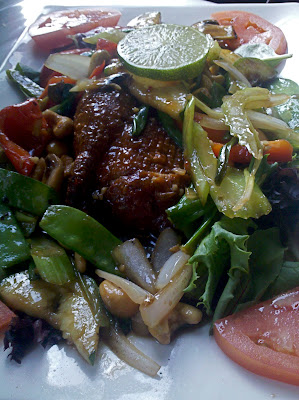 It was delicious – we were both quite pleased with the taste. But the fake duck breast had a little fake duck wing attached to it. It looked like there should be a bone inside, but when you cut it, it was just all fake duck meat. That made me suspect that back in the kitchen there was a fake duck breast mold into which the wheat gluten mixture was poured.

I have to ask: why? I don’t want to eat a duck, even if it is a pretend duck. I’d rather just eat the duck-flavored wheat gluten stuff in chunks or strips or whatever its natural form is. And where does one get a fake duck breast mold? Is there a market for such things? Maybe the folks at My Thai use their mold to make duck breast-shaped Jell-O for dessert. Kill two birds with one stone, so to speak.

Despite the weirdness of the fake duck, this is about as good as an unpretentious little vegan place that doesn't have a website gets.
Posted by Unknown at 12:32 PM